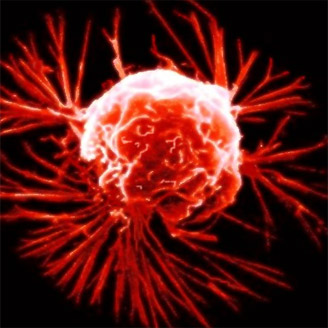 U.S. cancer researchers have announced a major advance in detecting cancer cells as they spread throughout the body of an affected person.

According to researchers at the University of California in Los Angeles (UCLA), this advance could lead to the use of nanotechnology to detect cancer and determine how rapidly it has spread, said

The researchers said they had used an atomic force microscope to literally poke a pointy stick against the side of living cells, to determine how flexible the cell walls are.

Because cancer cells have to squeeze into tight places as they spread through a body, these diseased cells are typically more flexible than healthy cells. By using the nanotechnology microscope and device to wield the sharp pointy object, scientists have a new tool to determine if any given sample cell is carcinogenic or not.

Jianyu Rao, a UCLA researcher, said the new high-tech optical test replaces the time-honored procedure of taking a tissue sample, dying it, and looking at it in old-fashioned optical microscopes to spot abnormal, carcinogenic cells.

“Usually the cancer cells have larger nuclei and other subtle features,” Rao said. “However, the normal cells from body cavity fluids can look almost identical to cancer cells under an optical microscope.”

Chemistry professor James Gimzewski said the nanotechnology process uses a tiny, sharp tip on a spring to push against the cell surface and figure out how soft it is, an indication of whether it is a colonizing cancer cell.

“You look at two tomatoes in the supermarket and both are red,” he explained. “One is rotten, but it looks normal. If you pick up the tomatoes and feel them, it’s easy to figure out which one is rotten. We’re doing the same thing.”