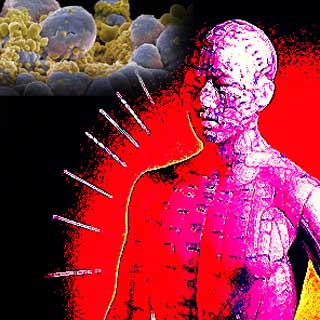 In case you are one of those who is suffering from the painful side effects of breast cancer treatment, may be a trip to an acupuncturist will work like magic. A unique study reveals that acupuncture may be as effective in managing the common debilitating side effects associated with breast cancer as conventional drug therapy.

Acupuncture is a technique of inserting and manipulating fine filiform needles into specific points on the body to relieve pain and for other therapeutic purposes.

The one-of-a-kind study showed that the acupuncture could help relieve some common side effects of breast cancer treatment like hot flashes, night sweats, and excessive sweating (vasomotor symptoms). With no treatment side effects and more effective than antidepressants, it may also have some added benefits that include an increased sense of well being, more energy, and in some cases, a higher sex drive.

“Our study shows that physicians and patients have an additional therapy for something that affects the majority of breast cancer survivors and actually has benefits, as opposed to more side effects. The effect is more durable than a drug commonly used to treat these vasomotor symptoms and, ultimately, is more cost-effective for insurance companies,” remarked Eleanor Walker, M.D., lead author of the study and a radiation oncologist at the Henry Ford Hospital Department of Radiation Oncology in Detroit.

The study included 47 breast cancer patients who had at least 14 flashes per week and were administered either Tamoxifen or Arimidex. In order to investigate if acupuncture reduced vasomotor symptoms in breast cancer patients on hormonal therapy in comparison to venlafaxine, the randomized clinical trial was followed up for about 12 weeks.

Interestingly, the group found that women who received acupuncture had fewer hot flashes and other common menopausal-like symptoms along with long lasting effects of the treatment and almost no side effects. Those women on venlafaxine also had relief from hot flashes but they had common side effects of the drug like nausea, dry mouth, headache, trouble sleeping, constipation etc.

Hopefully, this research should bring relief to the millions suffering from breast cancer. Nearly 80% of breast cancer patients who are treated with chemotherapy or anti-oestrogen therapy suffer from hot flashes and other painful symptoms. Alternative treatment for these patients includes steroids and/or antidepressant drugs which however are known to have additional side effects such as weight gain, nausea, constipation and fatigue.

The study is expected to be presented on September 24, 2008, at the American Society for Therapeutic Radiology and Oncology’s 50th Annual Meeting in Boston.