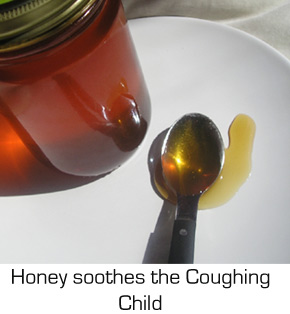 A new study has found that honey may offer parents an effective and safe alternative for a cough compared to over-the-counter children’s cough medicines.

The study conducted by the Penn State College of Medicine research team, found that a small dose of buckwheat honey given before bedtime provided better relief of nighttime cough and sleep difficulty in children than other treatment such as dextromethorphan (DM), a cough suppressant.

In fact, honey did a better job reducing the severity, frequency and bothersome nature of nighttime cough in the upper respiratory infection that DM or no treatment at all.

Further, honey showed a positive effect on the sleep quality of both the coughing child and the child’s parents. The study proved that DM was not effective to alleviate childhood coughs.

The findings of this new study come at a time just when the FDA advisory board recommended that over-the-counter cough and cold medicines should not be given to children less than 6 years of age solely due to their ineffectiveness and potential for side effects.

Moreover, in a previous study published in 2004, Ian Paul also of the Penn State College of Medicine showed that DM did not perform better than a placebo at reducing night-time cough or for improving the quality of sleep.

However, honey which has been used for centuries and is a common home remedy, is considered to be safe for children over 12 months old. Honey is known for its antioxidant and antimicrobial effects which also explain its significance in wound healing. Honey also soothes on contact, which may help explain its effect on coughs as suggested by the WHO.

Parents must know that DM has potentially dangerous effects in young children which include dystonic reactions, severe involuntary muscle contractions and spasms. Further, DM is also commonly abused as a drug by adolescents.

Paul, a pediatrician, researcher and associate professor of pediatrics at Penn State College of Medicine and Penn State Children’s Hospital said, “Additional studies should certainly be considered, but we hope that medical professionals will consider the positive potential of honey as a treatment given the lack of proven efficacy, expense, and potential for adverse effects associated with the use of DM.”