The first part of Dyslexia – The Hidden Handicap feature ended with Purnima Mirchandani giving us the basic idea of Dyslexia and how it occurs. Here she discusses with us the complexities involved in the learning disability, that involve parents, schools, dyslexic children, and most of the essential things curious parents and children would like to know. 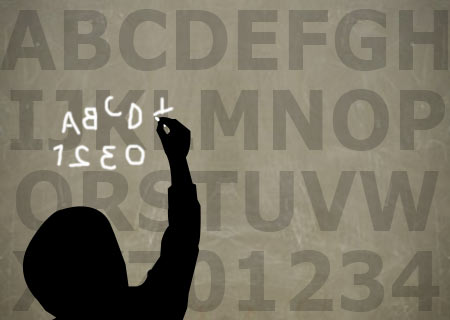 HJ: Are there any measures to be taken by parents, teachers and society to support the affected child?

PM: Yes. Empathy is the key word. Understand that the child is facing difficulties. Very often parents do not understand what the child is facing; they label the child lazy, not paying attention stubborn, being difficult, doing it purposely etc. Very often the severe cases, who have much more difficulty face failure in school and are called back-benchers and are made fun of – these kinds of labels are put on the child. Actually why would a child want to be like that? No child would want to not perform, everybody wants to be the centre of attention, be known, to be good, why he would he not want to? But if consistently you are having difficulty and people attach negative labels to you, it becomes like “Everyone thinks I am stupid, so maybe I am really dumb!” It’s a vicious cycle which we need to help to break. So parents, teachers and society at large need to understand this.

Support the child by giving him the right remedial help first of all and the school needs to able to support by not criticizing him continuously, by not making him an object of ridicule. Peers tease him about his learning disability as they don’t understand why he is not able to do well academically.
The educational boards, like ICSE, CBSE and SSC boards and others should give certain provision to such children like more time, spelling errors not being marked, calculator for Maths calculations, exemption from 2nd language etc. The school should be empathetic and say OK this child is dyslexic and he has his difficulties so let us help him to show his full potential. Of course, the school cannot decide everything, a report is sent to the board after which the board says yes (permitting for certain provisions for the dyslexic child). However, the first thing that school should do is must send it (report) to the board which very often the schools don’t do. They don’t want to help the child .They say “our school is not meant for dyslexics. Our school does not have any kids with dyslexia.”

It is the population at large; you cannot say our school does not have dyslexics. The school must of course recognize this, forward the reports to the board and once the board sanctions the result or whatever the provisions are, give that to the child to get the benefit.

I have seen children who have got the benefits and get 80-90 percent (in results) like any of the other kids. So let them realize it. I have seen kids who have done so well that they have gone to Howard and business schools abroad and have done so well for themselves. Give them that little edge so that they can compete with their peers academically as well as in other fields.

HJ: Can you provide us with the list of special schools for dyslexic children in Bombay?

PM: In Bombay, I know of only two schools – one is Nalanda Institute which is in Byculla and the other is called JBCN which has opened a couple of years ago in Lower Parel. As far as the suburbs are concerned I don’t have a clear idea, however, there a few of the mainstream schools that have resource rooms which is what we need. These children need to be in the mainstream with resource teachers to guide and help them where needed, to help them cope with the academic work and to realize their potential.

HJ: Are there any special provisions made for dyslexic children in normal schools?

PM: The need is for each school to have a resource room with a counselor, psychologist, and a remedial teacher helping the child, that’s what the need is. Orient the mainstream teachers to understand it (dyslexia/learning disability). Very often they don’t understand it so how can they help the child? I very clearly remember one of my first cases, way back in 1990 – a 9 yr old boy was told by his headmistress that something was wrong with him and that I would examine his brain and help him. He thought that I would “operate” on him! Can you imagine how his thoughts must have run riot! What that teacher needed was understanding and sensitivity. And this was in the days when dyslexia was a word not known to the lay person. When people asked me what I did for a living, I would have to explain the whole concept of dyslexia – as they mistook it for mental retardation or slow learner.

HJ: Can you give us an idea of how many cases of Dyslexia are identified everyday?

PM: There are so many people who are working in this field so one cannot say for sure but I for a fact identify 90 percent of the cases who are referred to me are dyslexic. I would say in a day I identify 2 or 3 cases.

HJ: Have you come across any special/extreme case?

PM: There are many special or extreme cases. A special or extreme case would be one who has like I mentioned to you both visual and auditory difficulties and sometimes along with that comes attention deficit with hyperactivity sometimes. Yes, there have been some cases where I have been pulling my hair out at the end of the day because I am so exhausted when the child’s has exhausted me because I have to keep my cool and not let my frustration show. So there are many such cases I have come across which are severely dyslexic. There are some who are borderline dyslexic, who learn to cope within a year or two of remediation. I cannot name any one case, as confidentiality is very important.

HJ: Can you give us an idea about the difference in awareness levels in comparison of India and abroad situations?

PM: (In India) The awareness is much more (now). In the earlier years when people would call me up for appointment for assessment, out of the ten cases who would call, only about seven actually come back for the history session. I have a session taking the history with the parent. I then have two-three sessions with the child to test and then I call parents again for the report session. So out of the 10 who would call me nearly 7 would come for the history session. Then I explain the whole concept of what dyslexia is because you have to explain the whole thing to them as they don’t know. Now more awareness is coming but still I do have to explain in detail. So, out of the 7 that actually came about 4 or 5 would actually come for the testing; 2-3 would just drop out. That drop-out rate is much less now. I would say 90 percent of the ones who called for the assessment do come through for the assessment. It is no longer seen as a stigma. That’s one of the things the movie has done – removed that stigma!

Especially in earlier days, the ones who were not educated, they would not come. The ones who are more literate would definitely come because they can see for themselves. Very often the mothers understand much more because they are the ones who teach a child and the marks the child gets may not be bad in some cases. But the mother knows “He/she is struggling so much to get this one thing across.” And the father would just see the marks and say “Oh! She is doing well.” But the mother can see that struggle to get to that point, the number of hours it takes to get to that point. And with the movie Taare Zameen Par it has became much easier to understand things. In a way, sometimes many kids who are not dyslexic also come for testing. I found that more now than before because they think “Oh! My child is dyslexic” and in a few cases it is not; whereas earlier hardly those cases would come who were not dyslexic. But 90 percent of the cases who come are dyslexic. They don’t come unless they have a problem. I haven’t seen anyone coming just for the sake of coming.

PM: Yes, there are many dyslexics all over the world who have proved themselves in many fields other than academics. Some have even proved themselves in academics when they have not had difficulties so much with their different skills. Then, as many people know must have read that there are many geniuses who are dyslexic like Einstein, Edison etc. But I have seen many of the cases I have worked with achieving great heights. Given the right help they can do wonders. So they must be given that little bit of edge to achieve those wonders that they are capable of. So dyslexia, like some people say, is a gift because children who are dyslexic have the ability to think in pictures, they have the ability to think differently from us. There are some dyslexics who are very good in architecture because they are able to visualize things that you and I could not possibly do. They could be artists; they could be speakers, orators because they know how to understand concepts to say it across. Each child is different and given that help, that empathy he will utilize his full potential.

HJ: Would you like to give any message to the parents?

PM: Don’t lose heart. At times it might seem like a long road ahead. There is a light at the end of the tunnel and just keep working at the child and praise him and encourage him.

HJ: Thank you so much Purnima for the valuable inputs and throwing some light on the much misunderstood ability in the guise of a disability.

PM: It was my pleasure.