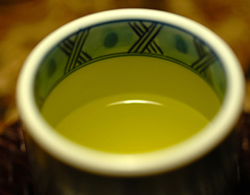 Here is another good reason to drink green tea. According to preliminary study that looked at the ability of green tea to protect bladder cells from inflammation, it was found that herbal agents could be used to treat such inflammations.

The University of Pittsburgh School of Medicine study, being presented at the annual meeting of the American Urological Association (AUA) in Anaheim, Calif., found that components of green tea protected bladder cells from damage in culture.

Green tea, reported to have many health benefits, is rich in powerful antioxidants that make it a possible remedy for many medical conditions. It is comprised of catechins – plant metabolites that provide it with many anti-oxidative properties.

According to Michael B. Chancellor, M.D., professor of urology and gynecology at the University Of Pittsburgh School Of Medicine, “We discovered that catechins found in green tea protected both normal and cancerous bladder cells from inflammation when we exposed the cells to hydrogen peroxide.”

“Although further studies are needed, these results indicate herbal supplements from green tea could be a treatment option for various bladder conditions that are caused by injury or inflammation,” he added.

In the study, normal and cancerous bladder cells were exposed to two major catechin components of green tea, epigallocatechin gallate (EGCG) and epicatechin gallate (ECG), for 23 hours. Both significantly protected cell lines from exposure to hydrogen peroxide, which damages or kills cells. The concentrations of EGCG and ECG used in the study were at levels that may be achieved through dietary intake.