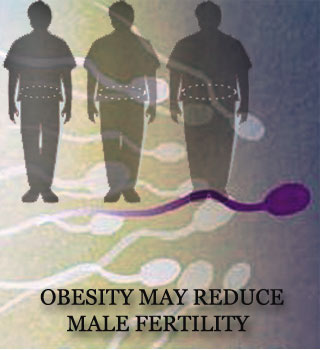 A man’s fertility these days seems to be quite vulnerable. Affected by practically everything under the sun, obesity it appears could be the next player. A recent study by researchers at the Pennsylvania State University College of Medicine in Hershey reveals that being fat could reduce a man’s fertility.

According to researchers obesity may lower a man’s chances of fathering a child as fat zaps their sex hormones. They went on to reveal that this could well be the case even for otherwise healthy men.

Lead researcher, Dr Eric Pauli, of Pennsylvania State University College of Medicine, additionally mentions that in case of couples who are assessed for unexplained infertility, physicians must take into account the weight of both partners.

As part of the study, researchers reviewed around 87 healthy men. The participants were between 19 to 48 years of age and nearly two-thirds of them had already fathered a child. The team measured the amount of fat these people had, namely their Body Mass Index. A BMI of 25 is considered overweight while that above 30 is considered obese.

Analysis of these men indicated hormonal differences that could hamper reproductive capacity. The researchers discovered lower levels of two key hormones critical to reproduction- luteinizing hormone (LH) and follicle-stimulating hormone (FSH) in the blood of men who were chubby. In comparison to thinner men, these men also had lower levels of the sex hormone testosterone.

Researchers suggest that obesity may be harming the testicles that produce sperms. Being fat could be affecting its functionality and it may not be working properly.

Earlier studies have linked obesity with a lowered sex drive and increased risk of erectile dysfunction.

The study is published in the journal Fertility and Sterility.