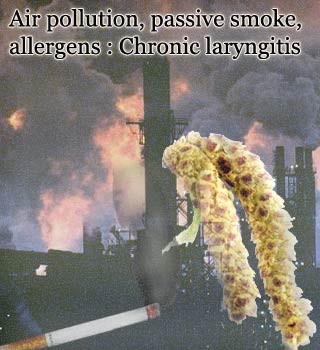 Pollution has been associated with a large number of ailments over the years. A new research now claims that regular exposure to environmental tobacco smoke, allergens, and air pollution may be the prime cause of chronic and recurrent cases of laryngitis.

Using animal models, researchers have discovered that exposure to a large number of environmental pollutants including dust mites and regular air pollution could well result in what is often called as ‘environmental laryngitis’. It could be blamed for the long-lasting and recurring conditions of this particular ailment.

Symptoms of laryngitis include hoarseness of the voice, chronic clearing of the throat and cough. Normally physicians and researchers relate the illness to a viral infection or overuse of the voice, however researchers have found that vulnerability to passive smoke and air pollution could also trigger the disease.

Researchers suggest that poor environmental conditions rather than the usual list of suspects can be blamed for a large number of laryngitis cases. Experts reveal that these findings are crucial especially in countries like China which are reported to have diminishing air quality and increased unhealthy levels of ozone and particle pollution. These places could lead to more cases of laryngitis and chronic laryngitis in particular.

While airborne toxic gases and fine soot or particulate matter are claimed to be the primary inducers of numerous ailments from heart diseases to asthma, laryngitis too joins the ailments pinned by pollution.

These findings were presented at the 2008 American Academy of Otolaryngology – Head and Neck Surgery Foundation (AAO-HNSF) Annual Meeting & OTO EXPO in Chicago, IL.

Autism is related to other disorders: Study