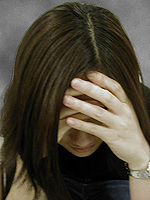 A new study was released on Monday by Israeli scientists, who said that depression could lead to brittle bones. The study also suggested anti-depressant drugs could be used to treat osteoporosis.

The scientists at Jerusalem’s Hebrew University said mice that were given drugs to induce behavior similar to human depression, suffered from a loss of mass in their bones, mainly their hips and vertebrae.

After being given anti-depressants, the bone density of the mice increased, along with their level of activity and social interaction.

“The new findings point for the first time to depression as an important element in causing bone mass loss and osteoporosis,” Hebrew University professor Raz Yirmiya, who took part in the study, said in a statement.

Depression activates the “sympathetic nervous system,” which responds to impending danger or stress, causing the release of a chemical compound called noradrenaline that harms bone-building cells, the study showed.

A study published earlier this month by the Forsyth Institute in Boston found that fluoxetine, used in the popular anti-depressant drug Prozac, also increased bone mass in mice.

Osteoporosis weakens bones and makes them more likely to fracture. It is treatable but affects millions and is most prevalent among postmenopausal women.

Why does stress cause DNA damage?