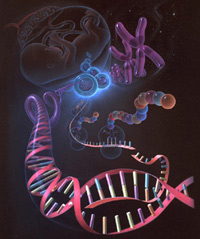 The US-based X-Prize Foundation has put up a 10 million dollar prize for the first team to decode 100 sets of human genomes in 10 days. The prize is meant to stimulate the field of rapid gene sequencing in a bid to usher in a new type of personalized medicine in which doctors could treat patients with individualised gene therapy.

Organisers will also offer a further 1 million dollars to the winning team to map the genetic sequences of the “Genome 100” – a group of celebrities, benefactors and members of the public that includes physicist Dr Stephen Hawking and CNN’s Larry King.

The competition is being organised by the X Prize Foundation which in 2004 paid out 10 million dollars to the winner of a competition for the first manned spaceflight.

The money for the new X Prize is being donated by Stewart Blusson, president of Archon Minerals and co-discoverer of the Ekati diamond mine at Lac de Gras in the Northwest Territories of Canada.

Scientists have already decoded an individual’s DNA – that of Dr J Craig Venter, who was one of the scientists behind the first sequencing of the human genetic code and now serves on the X-Prize’s scientific advisory board.

But current techniques are costly and lengthy and scientists say the real benefits will only come when a much larger sampling of genetic information is available to help decipher the environmental and hereditary aspects of disease.

“We need a database of millions of human genomes to help us fully decipher the nature and nurture aspects of human existence,” Venter said.