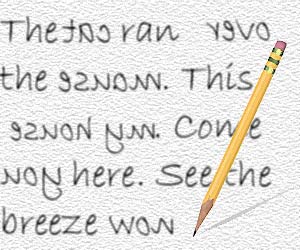 Research by scientists at the Oxford University suggest that a common genetic variant may be responsible for causing poor reading disability in people who are otherwise not identified with dyslexia. This discovery researchers hope will lead to better treatments for millions of dyslexics all over the world.

Dyslexia, a learning and reading disorder affects at least one in ten individuals. It is in no way related to intelligence of a person and affects only the literacy and language related skills of an individual. During the course of this study, scientists found that people who were carriers of the particular gene variant performed worse than average in reading ability tests.

Dr Silvia Paracchini from Wellcome Trust Centre for Human Genetics at Oxford and lead researcher of the study, remarked, “On average, people carrying this common genetic variant tended to perform poorly on tests of reading ability. However, it is important to note that this is only true for reading ability and not for IQ, so it doesn’t appear to be connected to cognitive impairment.”

She additionally mentioned “This is clearly only part of the jigsaw puzzle that explains why some people have poorer reading ability than others or develop dyslexia. There are likely to be many other contributing factors, but our research provides some valuable clues. We need to carry out studies into the exact role that this gene plays in brain development and how this affects people’s reading ability.”

In addition to this Professor Margaret Snowling, vice president of the British Dyslexia Association reveals that other genes and environmental factors probably also played a key role in determining reading ability.

According to researchers the sequence of DNA that can be associated with dyslexia is a haplotype and included part of the key gene KIAA0319, which lies on chromosome six. More than 6000 children between 7 to 9 years of age were who had enrolled for the major long term study called Avon Longitudinal Study of Parents and Children (ALSPAC) were analysed. This wide investigation includes the monitoring of around 14,000 mothers with their children for the past 18 years.

A tests of the reading abilities of these participants showed that about 15% of the individuals who carried the gene had reading and spelling problems. A disturbing fact was that these 15% were not actually victims of dyslexia. But the presence of the gene variant seemed to cause the reading and writing disabilities. This researchers say, brings to light many children and adults who are not dyslexic but have reading disabilities.

Previous research by the Oxford team suggests that the same haplotype is linked to reduced activity of the KIAA0319 gene during development of the foetus. This in turn was found to act like a dimmer switch, reducing the power of the gene to do its normal job as the foetus grows affecting development of the cerebral cortex, the area of the brain responsible for thought processes.

This novel discovery could help children cope with the condition especially if the gene is identified early in young children. The identified gene is carried by about 15% of the UK population reveal the researchers.

Published in the American Journal of Psychiatry, the study indicates that the gene has no impact on general intelligence.