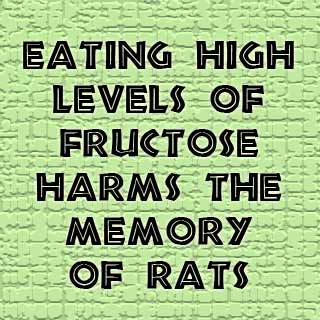 If you thought that the intake of sweet foodstuffs may only affect your dental and physiological health, then you may want to reconsider your thoughts. It seems that the consumption of foodstuffs high in fructose, a type of sugar, affects the spatial memory of adult rats. This claim has been made by the researchers at the Georgia State University.

Fructose is noted to a type of sugar which is often found in processed foodstuffs and beverages. However, unlike glucose (another type of sugar), fructose is presumed to mainly be processed by the liver. It is also believed to produce triglycerides, which is fat that enters the bloodstream, in great quantity. Apparently, this type of fat may have the ability to hamper the brain’s insulin signaling, which is noted to play a vital role in the survival or plasticity of the brain cell, or its ability to adapt to new experiences.

In order to test the effect that a diet high in fructose may have on the brain, these researchers were stated to have fed such a diet to a special breed of rats. To be precise, such a diet was fed to these rats where fructose represented almost 60% of the calories ingested during the day.

This research was conducted by Amy Ross who is a graduate student in the lab of Marise Parent, associate professor of Georgia State’s Neuroscience Institute and Department of Psychology.

The researchers were believed to have placed the rats in a pool of water, in order to test their ability to learn how to locate a submerged platform which could get them out of the water. Two days after this test, the rats were evidently again introduced to the pool, but this time there was no platform present. The second test was performed in order to see if the rats could remember to swim to the platform’s location.

Parent observes that, “What we discovered is that the fructose diet doesn’t affect their ability to learn. But they can’t seem to remember as well where the platform was when you take it away. They swam more randomly than rats fed a control diet.”

Supposedly, these observations were alike in adolescent rats as well. However, these experts are not certain if the effects of high fructose intake are temporary or permanent. Human beings are believed to have lower amounts of fructose as compared to the amount fed to the rats for this experiment. Having said this, it was also stated that there is a steady rise in the intake of foodstuffs sweetened with fructose. Some of these foodstuffs include fruit juice concentrates, common table sugar, high-fructose corn syrup, etc.

Parent concludes that, “The bottom line is that we were meant to have an apple a day as our source of fructose. And now, we have fructose in almost everything.”

Greater consumption of fructose is noted to be linked with various health issues which include Type 2 diabetes, obesity, insulin insensitivity and heart-related diseases. For this purpose, moderate consumption of these foodstuffs, along with exercise is believed to be one efficient way of tackling with this issue.