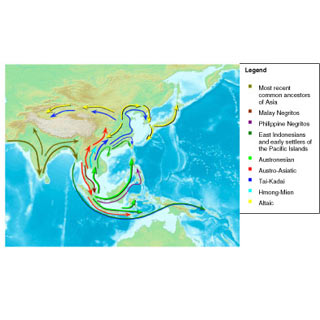 A study related to genetic diversity in Asia was conducted by the Human Genome Organization’s (HUGO’s) Pan-Asian SNP Consortium. This study apparently included around 73 Southeast Asian (SEA) and East Asian (EA) populations.This human genetic mapping of Asia appears to have significant connotations particularly in the additional comprehension of wandering patterns in human history, and also for the study of genetics and diseases.

The study was alleged to be performed in and between the diverse populations in the Asia continent. It is said to have exhibited that genetic ancestry appeared to be extremely connected to cultural and linguistic groups. An obvious augment in genetic range from northern to southern latitudes was also apparently seen.

“This study was a milestone not only in the science that emerged, but the consortium that was formed. 10 Asian countries came together in the spirit of solidarity to understand how we were related as a people, and we finished with a truly Asian scientific community. We overcame shortage of funds and diverse operational constraints through partnerships, good will, and cultural sensitivity,” commented One of the corresponding authors, Professor Edison Liu, Executive Director at the Genome Institute of Singapore (GIS), and the President of the HUGO which initiated and coordinated this study.

Professor Edison Liu added, “Affymetrix, led by Dr. Giulia C. Kennedy and based in the US, is our primary technology partner in this endeavour. We greatly appreciate their support. Our next goal is to expand this collaboration to all of Asia including Central Asia and the Polynesian Islands. We also aim to be more detailed in our genomic analysis and plan to include structural variations, as well as over a million single nucleotide polymorphisms in the next analysis.”

It was proposed that one main inflow of human migration into Asia seems to be occurring from Southeast Asia, as opposed to numerous inflows from both southern and northern routes as anticipated before. This is believed to signify that Southeast Asia was the chief geographic source of East Asian and North Asian populations. Furthermore, the geographical and linguistic basis of genetic subgroups in Asia supposedly explains the requirement for genetic stratification when carrying out genetic and pharmacogenomic studies in this continent.

The findings of the study were published in Science.