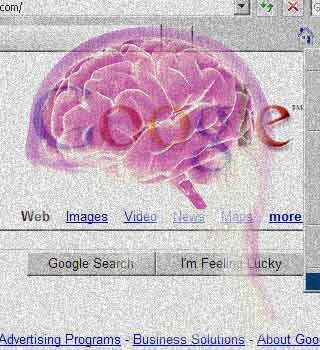 The first of its kind study to size up the effects of internet surfing on the way the brain performs, researchers looked at the brain scans of adults over middle age. The scientists found that going on the internet and searching for stuff proved to be quite a brain teaser. The action stimulates and exercises the brain much more then a passive activity like reading a book.

Lead researcher Dr. Gary Small, a professor at the Semel Institute for Neuroscience and Human Behavior at University of California, remarked, “The study results are encouraging, that emerging computerized technologies may have physiological effects and potential benefits for middle-aged and older adults. Internet searching engages complicated brain activity, which may help exercise and improve brain function.”

Dr Small, who is also the director of UCLA’s Memory and Aging Research Center, further added, “Our most striking finding was that internet searching appears to engage a greater extent of neural circuitry that is not activated during reading – but only in those with prior internet experience.”

To ascertain the impact of the internet on the brain, researchers analysed volunteers between the ages of 55 and 76 with healthy brain function. While half the participants had internet browsing experience, the other half had no experience. Both groups had similar age, educational level and gender backgrounds.

Participants in both groups took to web searching and reading books along with getting a functional magnetic resonance imaging (fMRI) scans done. The MRI recorded the subtle brain-circuitry changes experienced during these activities tracking the intensity of cell responses in the brain by measuring the level of blood flow during tasks.

In the book-reading task, all the volunteers showed to have used the regions controlling language, reading, memory and visual abilities located in the temporal, parietal, occipital and other areas of the brain. However a significant difference in the two groups was noted due to internet searches. Though participants showed brain activity identical to that during book-reading, the web-savvy group also demonstrated registered activity in the frontal, temporal and cingulate areas of the brain. These areas of the brain are those that control decision-making and complex reasoning.

In addition to this those with hands on experience of surfing the internet demonstrated a twofold increase in brain activation as against those with little internet experience.

A wide known fact is that as we age the brain undergoes various changes which impact our performance. Changes include general wasting and reductions in cell activity. However it now appears that for computer-savvy middle-aged and older adults, searching the internet may prompt key centres in the brain.

The study is published in the American Journal of Geriatric Psychiatry.