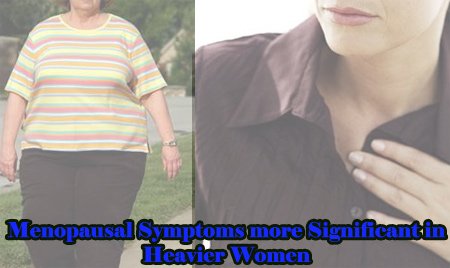 A new study has shown that the higher a woman’s percentage of body fat at menopause, the more likely she is to experience symptoms such as hot flashes and nightly sweats. The study suggests that excess fat makes it harder to dissipate heat.

Hot flashes and night sweats are also known as vasomotor symptoms. These symptoms had previously been thought to be less common in heavier women at menopause, since body fat can convert male hormones into estrogen.

Heavier women would therefore have a reserve source of estrogen that could shield them from these symptoms, reasoned Dr. Rebecca C. Thurston of the University Of Pittsburg School Of Medicine and her colleagues.

However, evidence that heavier women may actually experience more vasomotor symptoms with menopause is mounting. Thurston and her team looked at 1,776 women going through menopause, to understand the relationship between body fat and menopausal symptoms. The study found 59% of women to have vasomotor symptoms.

The researchers found that as body fat increased, the so did the likelihood that a woman would have hot flashes and night sweats.

Based on these findings, Dr. Thurston and her colleagues have added that weight loss, especially loss of fat, could just help women going through menopause to reduce hot flashes and night sweats.