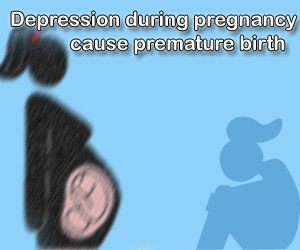 When bad things happen as they will, you shouldn’t be disheartened. Life must go on and we’d say don’t let what happens to you in the present affect your future. Staying cheerful is essential for your mental and physical well being, all the more if you are pregnant as a new study suggests that pregnant women who suffer depression are twice as likely to give birth to a preterm baby.

Conducted by the Kaiser Permanente Division of Research, the distinct study found that in comparison to those who easily beat their blues, pregnant women who sulk over things and get depressed easily run a two-fold risk of giving birth to a premature baby. Those who are most prone to early birth phenomenon are pregnant women who are severely depressed.

“Preterm delivery is the leading cause of infant mortality, and yet we don’t know what causes it. What we do know is that a healthy pregnancy requires a healthy placenta, and that placental function is influenced by hormones, which are in turn influenced by the brain,” reveals Lead author Dr De-Kun Li, a reproductive and perinatal epidemiologist.

As part of the research, experts’ cattle-called about 791 women in San Francisco. These were women in their 10th week of pregnancy and asked them a series of questions about their emotional wellbeing that could be linked to the progress of their pregnancy. They did in fact find a significant association between the two as nearly 41% of women reported to suffer from symptoms of severe depression.

Interestingly researchers discovered that there was a 60% higher risk of a premature baby for women with less depressive symptoms as against women who exhibited symptoms of heavy depression. The study did not include women who were on antidepressants, hence the scientists have ruled out a link between the drug and preterm birth. In addition to this, scientists assert that pregnant women who face severe depression are at two times increased risk compared to those who suffer from mild depression.

Researchers found that symptoms of depression were found in most women characterized by factors like age below 25 years, less educated, poorer, black, history of preterm delivery and unmarried. Medically premature birth is defined as birth before 37 weeks of gestation. One of the biggest causes of infant mortality, nearly 1 in 10 babies in England is born early.

The study is published online in Human Reproduction journal.