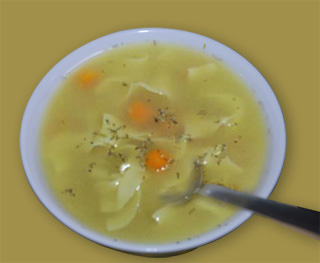 It now appears your daily bowl of chicken soup could do more than just satiating your taste buds. You heard it right! Grandma’s penicillin as it is commonly called not only helps you fight colds and influenza, but may also help in lowering your blood pressure.

The findings of a Japanese study led by Ai Saiga of Nippon Meat Packers, the research shows that chicken leg meat that is the main component of chicken soup is rich in certain types of a chemical called collagen that may help lower the tension in our muscles. This in turn reduces the constriction in our blood vessels and hence our blood pressure.

Saiga mentioned, “Control of blood pressure by means of diet is considered to be very important, therefore the objective of this study was to contribute to the widening of the range of foods that are appropriate for hypertensive patients.”

Based on an earlier study which showed that chicken breast mainly contains collagen proteins that have effects quite similar to Angiotensin-converting enzyme (ACE) inhibitors. ACE is the medicines that are used to reduce high blood pressure and its inhibitor class comprehends drugs like captropril, fosinopril, lisinopril, perindopril, ramipril and trandolapril.

Researchers reveal that while chicken breast contains collagen in very small quantities, the other parts of the chicken like leg and feet are rich sources of collagen proteins. The scientists tested the collagen’s ACE inhibitor-like ability in lab studies by extracting collagen from chicken legs. Chicken legs are often discarded as waste products in the United States; however they are the main soup ingredient in other places around the globe.

In the course of their study researchers discovered four different proteins in the chicken collagen mixture that showed high ACE-inhibitory activity. The researchers then gave this chicken collagen mixture to rats who were modeled to show high blood pressure conditions similar to those in humans. The laboratory rats responded well to the mixture and showed consequently lowered blood pressure levels.

Researchers thus suggest that lowering your blood pressure could be as simple as eating a bowl of chicken soup. However, experts reveal that further studies are required to affirm these findings before including chicken soup as a part of treatment for blood pressure problems.

While researchers get to the root of the chicken soup-blood pressure association, we think a little chicken soup will not cause you harm. Quite simple to prepare, easy to digest and relatively affordable, chicken soup is known to be a good food for winter convalescents too.

The study is part of a publication in the October 22 issue of ACS biweekly Journal of Agricultural and Food Chemistry.