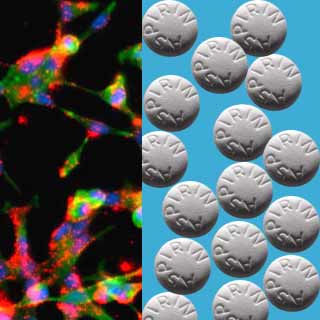 This study was called the Nashville Men’s Health Study. This study included more than 1000 volunteers. These volunteers underwent a prostate biopsy by an urologist. Almost half of these men were already on NSAID or aspirin for their cardiovascular well being.

A PSA test is mainly conducted to unveil prostate cancer symptoms in a potential patient. Men with higher PSA levels are more vulnerable to the development of prostate cancer tumor cells. It is also believed that high PSA levels can point out non-cancerous enlargement of the prostate gland, called prostatic hyperplasia (BPH).

Keeping in mind the volunteer’s race, body weight, prostate cancer history, age, etc. among other things which can influence the size of the prostate organ; the researchers discovered that aspirin was responsible for lower PSA levels. As compared to the non-NSAID users, the NSAID users PSA levels were 9% lower. In men who had being diagnosed with prostate cancer, the PSA levels were very low; thus indicating that maybe these drugs are treating the cancer instead of the symptoms.

Jay H. Fowke, Ph. D., an assistant professor in medicine at Vanderbilt and also the study’s lead researcher, says that, “To begin to understand how aspirin may lower PSA, we also looked at the association between NSAID use and prostate volume. Aspirin users and men who didn’t use aspirin had the same prostate volume, so I don’t think aspirin was changing PSA by changing the prostate volume. It was doing something different, and that suggests a beneficial effect on cancer development. The effect of aspirin on PSA was only somewhat evident among men without prostate cancer but was strongest in men later found to have prostate cancer. This also suggests an effect on cancer as opposed to other prostate diseases.” He further says, “Several prior studies reported anti-inflammatory drugs like NSAIDs were associated with lower prostate cancer risk. Our data also suggest that NSAID use has a beneficial effect on prostate cancer. These findings could be consistent with a protective effect, because aspirin reduced PSA levels more among those men who were diagnosed with prostate cancer than among men with other prostate diseases.”

This means that doctors who rely on the indication of the PSA levels to treat their patients suffering from prostate cancer, could be postponing the treatment required.

The researchers will be presenting their study at the American Association for Cancer Research’s Seventh Annual International Conference on Frontiers in Cancer Prevention Research.

Gut worms may be important for averting asthma and other diseases