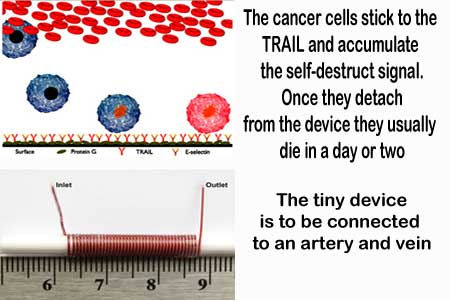 Cornell researcher, Michael King, has developed a minute implantable device, which is believed to detect and destroy cancer cells in the blood stream, before it replicates in the body. King calls the device a lethal “lint brush.”

This research was conducted at the University of Rochester. King, an associate professor of biomedical engineering, revealed that two proteins occurring naturally can, supposedly, work in unison to draw and destroy the cancer cells. It’s also stated that they destroy around 30 percent of the tumor cells, without causing harm to the healthy cells, in the bloodstream.

According to him, this technique benefits from the natural mechanism of the human body, to fight against infections. He says that, this could be responsible for the discovery of a number of new cancer treatments.

King makes use of a small tube-like device, which is said to be coated with proteins. These proteins are, supposedly, believed to be implanted in a peripheral blood vessel, which in turn, apparently, sorts out and destroys the cancer cells in the bloodstream.

King has, evidently, in an attempt to trap the tumor cells in the blood stream, made use of selectin molecules. These molecules are believed to be proteins, which react to an infection or injury, by moving on to the surface of the blood vessels. After the entrapment of the cancer cells through the selectin molecules, they were introduced to the TRAIL proteins. TRAIL or Tumor Necrosis Factor Related Apoptosis-Inducing Ligand, supposedly, holds on to two so-called “death receptors” on the cancer cells’ surface, which in turn triggers a process which results in the self-destruction of these cells. After this, the TRAIL lets the cells loose in the blood stream, where they perish, and the same process is repeated all over again with the remaining new cells.

According to King, the usage of this device in collaboration with traditional cancer therapies, can significantly reduce the metastatic cells, and also permit the body’s natural mechanism to fight against these infectious cells.

This device was supposedly tested on prostate and colon cancer cells, however it’s stated that they can be additionally customized and used on various other types of cancer cells as well.

The transformation of this research in a clinical application is believed to take a few more years to come. King says that, this is an entirely different way of treating cancer. He says that, a lot of research and work is needed to be done, before the device can show results on people, however, this is initial process of the working of the device.

The research is published in the Biotechnology and Bioengineering journal.

New technique alleges feared side effect of Alzheimer drug could be...