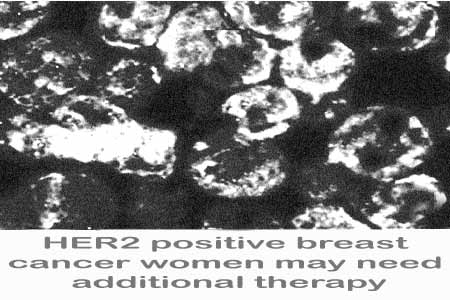 Latest study reveals that, apparently, the early stage breast cancer patients with HER2 tumors are more prone to this disease re-growth, as compared to the early-stage disease patients minus the specified tumor. This study was conducted by the researchers at The University of Texas M. D. Anderson Cancer Center.

Human Epidermal growth factor Receptor 2 (HER2) is believed to be produced in high amounts by an estimated 15-20 percent of breast cancer cells. The HER2 protein is said to be produced on the cancer cells surface, which makes the cancer more aggressive. Herceptin or trastuzumab, is said to be a monoclonal antibody that holds on to these proteins and thus curbs the tumor growth.

Ana M. Gonzalez-Angulo, M.D., assistant professor in M. D., Anderson’s Department of Breast Medical Oncology and Systems Biology, and also the study’s senior author says that, since early detection and breast cancer surveillance has enhanced, the total number of patient’s suffering from HER2 positive tumors, smaller than 1 centimeter, has considerably increased. He further says that, before this study, apparently, there was not much accumulated data on how to treat the women with this specific tumor, mainly because they were not a part of the trials which verified the positive effect of Herceptin. “This data strongly suggests that we need to rethink how we treat early-stage breast cancer patients with HER2 positive tumors and likely offer anti-HER2 therapy in the adjuvant setting,” he says.

The authors state, presently, if the tumors are lesser than 5 millimeters, then supposedly there is no requirement for an added therapy after the commencement of surgery and radiation. Also that, the diagnosed patient’s, suffering from 6- 10 millimeters of tumors, should be given the required knowledge about the Herception-based adjuvant therapy.

The authors referred to the M. D. Anderson’s Breast Cancer Research Database, and scrutinized more than 900 patients, for this study. The women studied, were 57 years of age on an average. Supposedly, all the patients’ tumors were smaller than 1 centimeter. Also patients whose receptor status could not be verified; who had received Herceptin or adjuvant chemotherapy were not included in the study. Another study was also conducted on around 350 people from European institutions, in order to verify their results.

Gonzalez-Angulo also says that, apparently, the European subset validated these findings. He also says that, this study will probably encourage the diagnosed patients to be a part of the clinical trails aimed at HER2 therapies.

Author’s recommend the women suffering from early-stage HER2 positive breast cancer, to be assessed for re-growth of this disease and hence treated.

Their findings were presented at the CRTC-AACR San Antonio Breast Cancer Symposium.