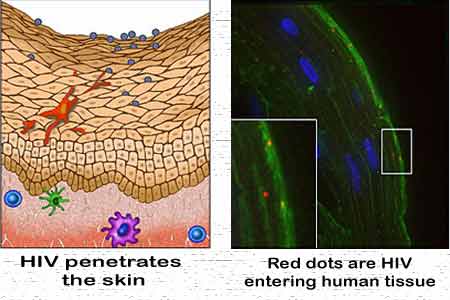 A new way of transmitting an HIV virus by a man to a woman, has been discovered by the researchers at the Feinberg School of Medicine, Northwestern University.

It was a long belief that the HIV virus, apparently, may not be able to easily penetrate the normal lining of the female vaginal tract, during sexual intercourse. Scientists presumed that, evidently, the virus may not be able to invade the tissue. However, the latest discovery has revealed that, supposedly, the HIV virus may be capable of invading a female genital tissue, to certain extent, where it can gain access to its immune cell targets.

Principal investigator, Thomas Hope, professor of cell and molecular biology, Feinberg School, says, “This is an unexpected and important result. We have a new understanding of how HIV can invade the female vaginal tract.” He continues, “Until now, science has really had no idea about the details of how sexual transmission of HIV actually works. The mechanism was all very murky.”

Researchers revealed that, apparently, the interior vaginal skin is prone to HIV invasion. This invasion is suspected to probably occur when the vaginal skin sheds naturally and gets replaced with new skin cells, when these cells are believed to be loosely bound together.

According to the Centers for Disease Control, an estimated 26 percent of American women and female adolescents get affected with all new HIV cases. A recent analysis revealed that, apparently, women consisted of more than half of the new cases of HIV infection globally.

Hope says that, there is an urgent need for the development of new ways of prevention and treatments, in order to curb the HIV virus invasion through a female genital skin. He also states that, apparently, condoms may be capable of curbing the virus entry, however, evidently due to what-so-ever reason not all the people make use of them while intercourse.

These researchers observed the virus penetration of the outermost lining of the female genital tract, by marking the HIV virus with photo-activated fluorescent tags. Earlier, scientists believed that, apparently, the HIV virus penetrated the female immune system through the single layer of skin cells that line the cervical canal.

Hope says that in this field a mistake that usually occurs is, apparently, the belief that HIV virus is transmitted in only one way. However, this is not the case. Evidently, these viruses are believed to be capable of spreading in numerous ways.

Hope believes that, his findings, if approved, may prove to be of assistance in developing treatments and vaccines to avoid HIV invasion.

Their findings are presented at the American Society for Cell Biology, San Francisco