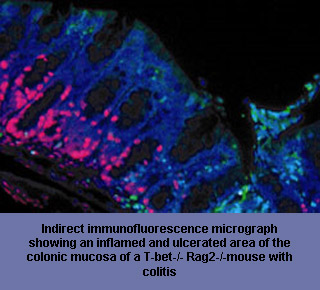 Inflammatory bowel disease (IBD) is a chronic inflammatory disorder affecting 1.4 million persons in the US itself. With almost 30,000 new IBD cases diagnosed annually in the U.S., understanding the disorder seems to be crucial. A research initiated by the Harvard School of Public Health claims that discovered bacteria dwells in the intestine and provides an environmental trigger that begins and continues chronic intestinal inflammation in individuals who are genetically susceptible to IBD.

The main types of IBD are known as Crohn’s disease and ulcerative colitis. Due to loss of homeostasis, or balance, between the immune system and microbes inhabiting the intestine, a patient may suffer from IBD. Investigators believe that the exact cause of IBD is still under covers. In the process of investigations, two microbes were discovered that seems to instigate gut inflammation causing IBD in mice. With the help of both metagenomic and conventional culture techniques, Laurie Glimcher, Irene Heinz Given Professor of Immunology at HSPH and senior investigator and colleagues were probably able to display an individual’s genetic background that influences what bacteria reside within the intestine.

The findings provide answers to hypotheses and certain species of bacteria known as Klebsiella pneumoniae and Proteus mirabilis which supposedly work in unison with the indigenous gut microbial community to trigger IBD. Investigations that are currently being carried out are analyzing the intestinal microbial communities of patients with IBD. Also research is undertaken to ascertain the role of Enterobacteriaceae which was apparently found in patients with IBD.

The research was published in the September 16, 2010, edition of Cell Host and Microbe.