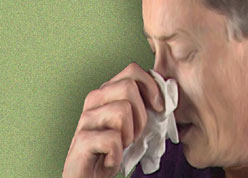 Ignoring a common cold could lead to chronic sinusitis. If a common cold is not treated for a long time, it could affect vision, or even harm the brain.

Specialists have said that chronic sinus cases, which have seen a rise die to environment and vehicular pollution could be caused due to cold, allergies, infections and even virus, fungi, bacteria, toxic medications and nasal abnormalities.

According to Dr. R C Deka, Head of ENT Department at AIIMS, even gulping down chilled drinks could lead to sinus or spaces around the nose.

“To beat the heat, many gulp down chilled beer and drinks, not knowing that it could cause harm and lead to sinus,” he said.

Deka said that sinus cases are on the rise, mostly due to bacteria and fungus in the environment.

“Traffic pollution plays a big role in causing this problem. If the irritation of the throat and nose persists for a long time then one should not ignore the signs,” he said.

Also facial pain, nasal discharge and blockage, persistent dry cough, sneezing, headaches, running nose and change of voice should warn a person that they need treatment for sinus,” he said.

Deka said fungal sinusitis could also affect brain and vision significantly as they are close to the nose.

“A person’s vision, power of smell and brain could be affected. But it is only when it becomes chronic,” he said.