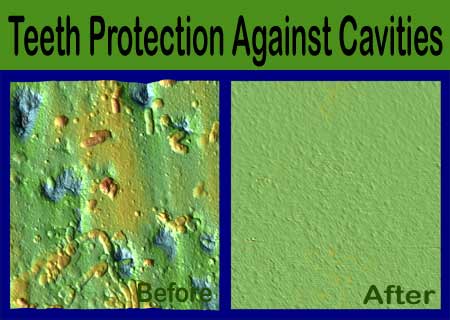 Apparently, a new technique of protecting one’s teeth from cavities, by ultra-fine polishing with silica nano-particles, has been discovered.

This innovative discovery was made by Professor Igor Sokolov and graduate student Ravi M. Gaikwad, from the Clarkson University Center for Advanced Materials Processing (CAMP).

Apparently, the researchers polished the surface of human teeth down to nano-scale roughness, by making use of the polishing technology used in the semiconductor industry. After the polishing procedure, the roughness left on the teeth, evidently is said to be about 100,000 times smaller than a sand grain.

The researchers revealed that, teeth polished in this way, apparently became very “slippery” for the “bad” bacteria. It supposedly became very difficult for the “bad” bacteria, responsible for the destruction of the dental enamel, to remain on the teeth. Thus, evidently, the bacteria could be effectively and easily removed from the teeth before they could harm the teeth enamel.

The researchers assumed that this technology may prove to be beneficial for the easy removal of bacteria, before they cause serious damage to the teeth. They can, apparently be easily removed from such polished surfaces.

Their findings were published in the dentistry journal with the top worldwide scientific impact index, the Journal of Dental Research issue.

Osteoarthritis could be due to inflammation, not just wear and tear