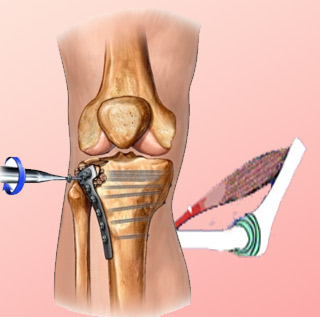 “One of the biggest challenges in regenerative medicine is to have a graded continuous interface, because anatomically that’s how the majority of tissues appear and there are studies that have strongly suggested that the graded interface provides better integration and load transfer”, remarked, Andres Garcia, professor at George Woodruff School of Mechanical Engineering at the Georgia Institute of Technology.

The synthetic bone substitute apparently mimics the strength and complexity of natural bone. The scientists used gene therapy to artificially engineer the distinct bone soft tissue interface. Beginning with a 10-mm scaffold of collagen, they coated it with scaffold using a gene delivery vehicle that would encode for a protein called Runx2. Next they ran a high concentration of Runx2 on the collagen that slowly decreased slowly until it reached the end.

Finally, researchers seeded the scaffold with dermal fibroblasts, causing skin cells to sprout uniformly on the Runx2-coated collagen. They observed that skin cells on the area with a high concentration of Runx2 gradually turned into bone while the skin cells on the other end became soft tissue. The result was a natural–seeming gradient of bone to tendon. This gradual shift provides better integration with the body thus allowing them to handle weight more successfully.

Not only did the researchers create an artificial bone that morphs into softer tissues but they also implanted the technology in vivo for many weeks. Experts reveal that the technology will also give many advances in surgery along with building limbs.

The details of this research are published in the Aug 26 issue of the journal Proceedings of the National Academy of Sciences.