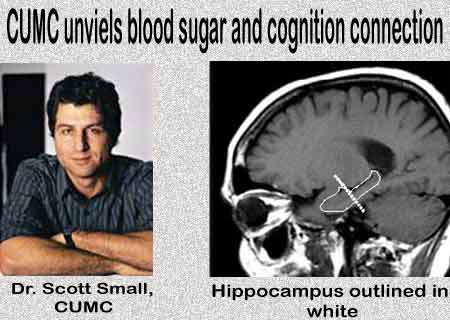 A latest study advocates that the maintenance of blood sugar levels, even in the absence of a disease, could prove to be a crucial technique for preserving cognitive health.

This study was conducted by the researchers at the Columbia University Medical Center (CUMC). The researchers evidently state that memory lapses could partly be the result of the increase in blood glucose levels in aging people.

Lead investigator, Scott A. Small, M.D., associate professor of neurology, CUMC, says that, “This is news even for people without diabetes since blood glucose levels tend to rise as we grow older. Whether through physical exercise, diet or drugs, our research suggests that improving glucose metabolism could help some of us avert the cognitive slide that occurs in many of us as we age.”

Dr. Small and colleagues, previously using high-resolution brain imaging, have evidently revealed that the decreasing brain function in the dentate gyrus of the hippocampus is believed to be the main culprit in the normal age related memory decline.

Seemingly this study evaluated the varying age related measures, like rising blood sugar, body mass index and insulin levels among others. The research seemingly discovered that the decreasing activity in the dentate gyrus was apparently associated with blood glucose levels.

Dr. Small says, “Beyond the obvious conclusion that preventing late-life disease would benefit the aging hippocampus, our findings suggest that maintaining blood sugar levels, even in the absence of diabetes, could help maintain aspects of cognitive health. More specifically, our findings predict that any intervention that causes a decrease in blood glucose should increase dentate gyrus function and would therefore be cognitively beneficial.”

Dr. Small concludes that physical exercise enhances glucose metabolism, which in turn reduces the blood glucose. Either through exercise, diet or development of potential pharmacological interventions, this particular research seemingly recommends that improvement in glucose metabolism could be a potential approach for better age related cognition. This research recommends physical exercise as a way to avoid the normal age related cognitive decline, by lowering the blood glucose levels.

Their findings are published in the Annals of Neurology issue.