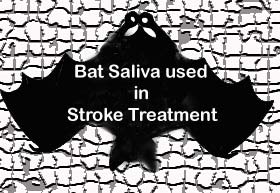 Evidently a clinical trial is being conducted in order to test the effect of desmoteplase or the drug based on a particular enzyme in bat saliva. The name of this drug is believed to be inspired from the bat’s scientific name, Desmodus Rotundus. While the bat feeds on its victim, this particular enzyme apparently thins the victim’s blood so as to avoid blood clotting.

This clinical trial was conducted by the University of Wisconsin School of Medicine and Public Health. Apparently an early trial of the drug yielded positive results that may aid in treatments for up to nine hours after the onset of stroke. Alteplase, the present gold standard for stroke treatment evidently proves beneficial for an average period of around four and a half hours. It seemingly also has the risk of potential serious bleeding in some patients.

Apparently a combination of desmoteplase drug with advanced brain imaging techniques is believed to yield satisfactory results for hours more than the conventional traditional clot-busting medicine. However, it’s stated that the results of second round of trials did not satisfactorily impress the experts. It’s stated that all the patients taking desmoteplase drug seemingly yielded the same results obtained from the placebo receiving patients.

Dr. Matt Jensen, a UW Health stroke neurologist, says a deeper analysis reveals that probably not all patients yield similar results. Some patients may prove to be best suited to this drug as compared to others. He says, “We think that there is a group of patients who may benefit. With more advanced imaging, we hope to be able to identify people who are more likely to respond to the drug.”

A blood clot apparently blocks an artery to part of the brain declining the flow of oxygenated blood to that part for several hours resulting in the death of brain cells, in an ischemic stroke. Jensen says that certain patients may be capable of better blood circulation which apparently permits the flow of oxygenated blood to the brain through other arteries. This technique may prove to be beneficial for brain survival till the blockage can be removed. Seemingly, the UW Hospital, through the use of advanced imaging techniques, will identify patients who are best suited for later treatments.

Jensen says that through this trial they may evidently be able to treat patients up to nine hours after the onset of stroke. He further warns that many people may misconstrue early stroke symptoms and thus delay getting treatment. Some early symptoms of stroke include: