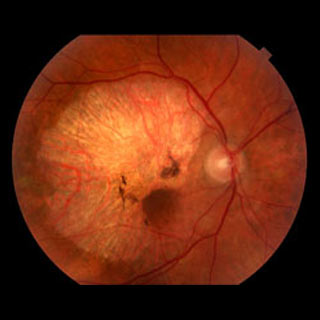 Geographic atrophy (GA) apparently is a severe form of age-related macular degeneration. Scientists from the University of California, San Diego have now developed a novel encapsulated cell therapy that slows the progression of this disease. It was suggested that long-term delivery of ciliary neurotrophic factor (CNTF) can re-nourish the retina and stop or slow the loss of visual acuity caused by GA.

During the trial, high-dose CNTF was delivered to 27 GA patients through encapsulated cell therapy (ECT). Also 12 patients were provided with a sham surgery, while 12 others received a low-dose of CNTF. It is believed that CNTF influences survival and differentiation of cells within the nervous system, including retinal cells. The ECT apparently used a capsule containing genetically engineered cells to continuously produce CNTF over 12 months. The CNTF-secreting capsule was implanted in the back of the study subject’s eye. This implant may have enabled CNTF molecules to diffuse into the eye tissue.

On completion of the study, experts observed a statistically significant difference in the change of the total macular volume in the eyes of study participants at the 12-month point. Stabilized vision was reported by 96.3 percent patients from the high-dose group and 75 percent provided with the sham surgery. Kang Zhang, MD, PhD, of the University of California, San Diego, Shiley Eye Center, the lead author of the paper and colleagues found that those treated with a high dose of CNTF had an elevation in retinal thickness within four months after implant. These patients also registered an increase that linked with the stabilization of vision.

The study is published online in the Proceedings of the National Academy of Science (PNAS).