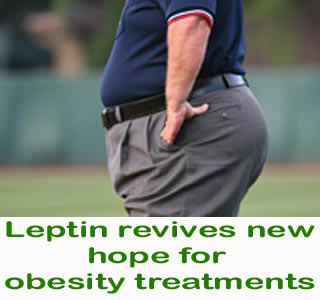 Almost a decade back the discovery of an appetite suppressing hormone secreted by fat tissue was made. This appetite suppressing hormone, Leptin, had increased the hopes and expectations for the development of various effective obesity treatments. However, disappointment struck when it was stated that obese people did not react to leptin because of the development of leptin resistance in the brain.

Harvard researchers at Children’s Hospital Boston save the day by revealing the first agents that can supposedly sensitize the brain to leptin.

Earlier researchers had zeroed in on the ob/ob protein that was present in normal mice but not in obese mice. When the mice were injected with this protein, they apparently ate less and thus lost weight. However, this hormone did not yield similar results in obese humans. Umut Ozcan, Children’s Division of Endocrinology, says that only temporarily the obese humans lost weight. “Most humans who are obese have leptin resistance. Leptin goes to the brain and knocks on the door, but inside, the person is deaf,” says Ozcan.

In this latest study, Ozcan and his team stated that obese mice apparently had increased stress in the endoplasmic reticulum (ER). The ER is structure within the cell were the proteins reside, which are folded into their appropriate configurations, and dispatched to do jobs for the cell. It’s further stated that ER gets stressed in obesity and hence it does not function effectively. This stress sets off a signaling cascade, the “unfolding-protein response,” that increases the level of molecular “chaperones” in an attempt to relieve the stress. This in turn aids in protein folding and also curbs the entry of more proteins.

According to the researchers, this entire ER stress procedure curbs the leptin action in the brain. Ozcan says, “I think our study will bring new hope for the treatment for obesity.”

This theory was tested on mice, which were fattened through a high-fat diet. The team also created a strain of mice who’s ER was weakened in the brain, by the removal of the XPB1 gene in the neurons. On pre-treating both the set of mice with a chemical chaperone, the researchers noticed a 10 times increase in leptin sensitivity. Even through a high-fat diet, these mice lost significant amount of weight with leptin treatment.

The researchers hope to soon be able to use their latest invention in humans as well.

Their findings are published in the Cell Metabolism issue.