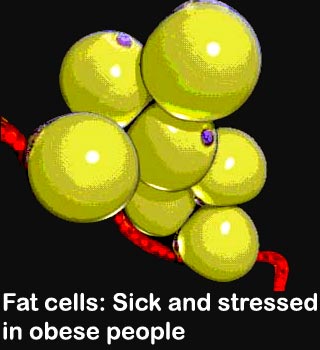 So you always thought fat is FAT, right? It’s a common notion for us to think that fat is just purely cells that can make us overweight. Surprise! A new study shows that these darn things called fat cells are actually not all created equally. The fat in obese people is ‘sick’ and ‘stressed’ as compared to fat from lean people.

A group of medical researchers from the departments of endocrinology, biochemistry and surgery, Temple University School of Medicine have found that cells in the fat tissue of obese people don’t work properly and are hence sicker than cells found in lean people.

The team led by Guenther Boden, M.D examined fat biopsies from the upper thighs of six lean and six obese patients. Finding significant differences at the cellular level, the researchers asserted that fat cells in obese people are too traumatized and hence lead to many obesity related complications. They theorize that an association between obesity and higher risk of diabetes, heart disease and stroke can be fully explained by sick fat.

Boden and Laura H. Carnell Professor of Medicine and chief of endocrinology remarked, “The fat cells we found in our obese patients were deficient in several areas hey showed significant stress on the endoplasmic reticulum, and the tissue itself was more inflamed than in our lean patients.”

Proteins in the body are synthesized by Endoplasmic reticulum (ER) that is found in every cell in the body. These also monitor how the proteins are folded. The lead author revealed that the fat cells in obese people show stress on the ER. Stressful ER in turn leads to the production of innumerable proteins that can ultimately lead to insulin resistance. It is common knowledge that insulin resistance plays a vital role in the development and advancement of obesity related conditions.

Presently, the team is looking at the possibility of free fatty acids as a potential cause for this ER stress. Researchers suggest that weight loss can eminently help in reducing the pressure on fat cells and further lower the risk of resulting conditions.

These study findings are published in the journal Diabetes.