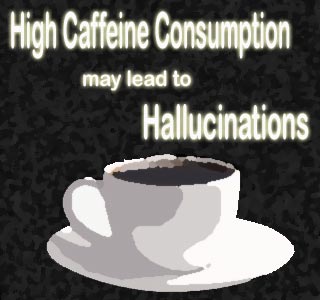 Who doesn’t appreciate a cup of coffee in the office break? However numerous trips to the coffee machine could prove to have more drastic effects than previously thought. A latest study says that high caffeine intake could lead to frequent hallucinations! This mind boggling study was conducted by the Durham University.

The study authors say that high caffeine intake could lead to hearing of imaginary voices or seeing things that may not be there. Caffeinated drinks include coffee, tea, and certain energy drinks.

The authors state that a decrease or change in the amount of caffeine intake per day may prove to be beneficial for the reduction of hallucination frequency.

Around 200 students were questioned about their caffeine intake source. Their stress level as well as vulnerability to hallucinations was also considered. Authors say that, under stress the body gives out the cortisol stress hormone. After the intake of caffeine a higher rate of this stress hormone is released by people under stress. It is believed that this could be the factor that links caffeine with an increase in the risk of hallucination. Some of the students reported experiencing different forms of hallucinations.

Simon Jones, Ph.D. student, Durham University’s Psychological Department, and also the study’s lead author, says that, “Hallucinations are not necessarily a sign of mental illness. Most people will have had brief experiences of hearing voices when there is no one there, and around three per cent of people regularly hear such voices. Many of these people cope well with this and live normal lives. There are, however, a number of organisations, such as the Hearing Voices Network, who can offer support and advice to those distressed by these experiences.”

Dr. Charles Fernyhough, from Durham University’s Psychological Department, and study’s co-author, says that in spite of having highlighted the link between caffeine and hallucinations risk in students, another factor also has to be taken into consideration. It could be possible that some of the students vulnerable to hallucinations consumed caffeine in order to deal with their hallucination experience.

They say that a more detailed analysis is required in order to verify if caffeine or maybe even nutrition plays a major role in experiencing hallucinations.

Their paper is published in the Personality and Individual Differences journal.