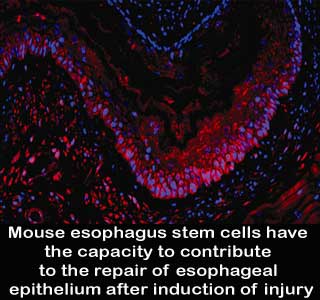 Stem cells have been discovered in the esophagus of mice, by the researchers at the University of Pennsylvania School of Medicine. These cells can, supposedly, mature into tissue-like structures. Apparently, when placed in immune deficient mice, these cells formed parts of an esophagus lining.

It stated that esophagus diseases are very common in the United States. Apparently, benign diseases like the gastroesophogeal reflux disease (GERD), can affect around millions of people. GERD is believed to; supposedly, often lead to inflammation of the esophagus, called esophagitis.

Senior author, Anil K. Rustgi, M.D., the T. Grier Miller Professor of Medicine and Genetics and Chief of Gastroenterology, says, “The immediate implication is that we’ll have a better understanding of the role of these stem cells in normal biology, as well as in regenerative and cancer biology. Down the road, we will develop a panel of markers that will define these stem cells and use them in replacement therapy for diseases like gastroesophogeal reflux disease [GERD] and also to understand Barrett’s esophagus, a precursor to esophageal adenocarcinoma and how to reverse that before it becomes cancer.”

Rustgi also says that the esophagitis can, apparently, sometimes trigger the normal esophagus lining to switch with Barrett’s esophagus lining, this lining is very similar to the intestinal lining. He continues that this can, supposedly, lead to esophagus cancer, which is, evidently, considered to be one of the fastest growing cancers in the United States. It’s estimated that, this cancer increases by around 7-8 percent a year.

These researchers are trying to detect potential stem cells that can, probably, renew themselves, in the esophagus. They are also attempting to better understand how to renew the cells that have been injured.

The researchers, apparently, grew mouse esophageal cells, which they assumed to be adult stem cells. These cells, supposedly, are believed to have formed self-renewed colonies. In a three dimensional culture apparatus, these cells, then, evidently, matured into esophageal lining tissue.

Pieces of esophageal lining were then tested in whole animals. When transplanted under the skin of immune deficient mice, evidently, the cells formed epithelial structures. A mouse model of the injury of the esophagus in a normal mouse depicted the process of acid reflux. It was noticed that, apparently, the green-stained stem cells drift to the injured lining cells and co-labeled with the repaired cells, thus hinting at the contribution of the stem cells in regeneration and tissue repair.

Rustgi says that, their main aim is to be able to detect the patient’s esophageal stem cells, and re-grow the same stem cells, and later inject them back, in order to substitute the infected tissue with a normal lining.

Their findings are published online in the Journal of Clinical Investigation.