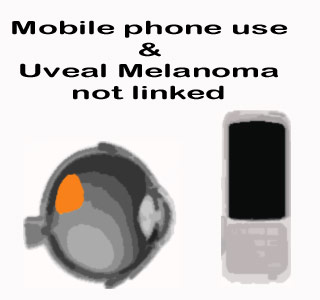 It is stated that no association has been confirmed between the effects that radio wave exposure may have on the DNA, further leading to cancer. Various studies are believed to have been conducted on the concern that mobile phone usage may be the causal factor of uveal melanoma.

The latest study was conducted by Andreas Stang, M.D., Martin Luther University of Halle Wittenberg in Germany; and his colleagues. They studied around 459 patients and 1,194 control subjects in order to evaluate the connection between mobile phone use and uveal melanoma.

The control subjects were said to have been chosen from the common general population, from ophthalmology clinics, and also from the patient’s siblings. The study subjects were placed in different groups based on the amount of time they spent on phone. They were divided as never users, sporadic users and regular users.

The authors state that, “In conclusion, we observed no overall increased risk of uveal melanoma among regular mobile phone users or users of radio sets in Germany, where digital mobile phone technology was introduced in the early 1990s.”

The results revealed that there wasn’t much link between long term mobile phone use and uveal melanoma risk.

Their findings are published online in the Journal of the National Cancer Institute.