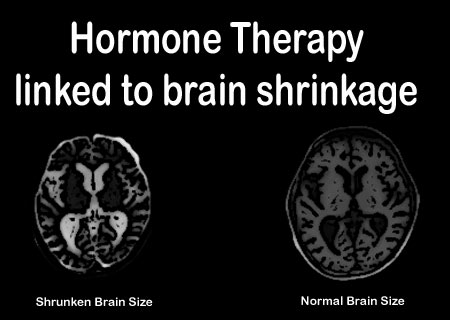 According to two latest studies the postmenopausal hormone therapy prescribed for older women may boost the loss of brain tissue in them. This loss is irrespective of the normal process of brain tissue loss that takes place with aging.

These two studies are based on the Women’s Health Initiative (WHI) hormone therapy clinical trials. The prior studies revealed that conjugated equine estrogens (CEEs), a form of hormone therapy, may bring about an increase in the risk of cognitive problems in older women. Apparently these drugs make women more susceptible to strokes and brain lesions (the changes that occur in the tissue due to blockage of blood flow).

Laura H. Coker, PhD, Wake Forest University Baptist Medical Center, lead author of the first study says that they did not find enough evidence to prove the link between hormone therapy and brain lesions. Coker and her team began wondering what potential adverse effect hormone therapy could have on women’s thinking and memory. They assumed the answer would be silent cerebrovascular disease. In an attempt to evaluate this theory, they conducted brain MRI scans of the women on the hormone therapy as well as off it. The obtained results astounded the investigators.

The second paper was led by Susan Resnick, PhD, National Institute on Aging, National Institutes of Health. In this paper, they state that the women on hormone therapy reportedly had slightly smaller brain volumes in the frontal lobe and hippocampus. These areas of the brain are very crucial for memory and thinking capability of an individual.

Susan says that, “Our findings suggest that hormone therapy in older post-menopausal women has a negative effect on brain structures important in maintaining normal memory functioning. However, this negative effect was most pronounced in women who already may have had some memory problems before using hormone therapy, suggesting that the therapy may have accelerated a neurodegenerative disease process that had already begun.” This could be the reason why their study results were different from the WHI memory study.

The investigators suggest the use of hormone therapies only if mandatory. They state that this drug should be taken in small doses and for very little while, in order to avoid unwanted complications. However, the negative effects of this drug may overshadow the positive effects in 65+ women, thus they should refrain from the use of this drug.

The investigators state that a deeper analysis needs to be conducted in order to better understand the effects of this drug on younger as well as older women.

Their findings are published in the medical journal of the American Academy of Neurology, Neurology.