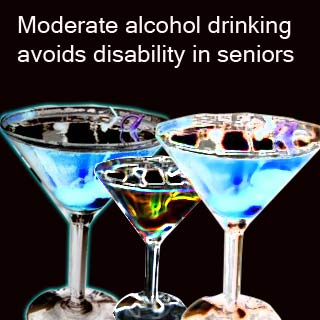 Moderate alcohol intake is believed to have positive effects on a person’s over all well being. A few glasses of red wine are supposedly associated with a good heart. A new UCLA study gives out another benefit of moderate consumption. They say that moderate alcohol intake in healthy older adults may improve their chances of avoiding physical disabilities.

This study was based on the data accumulated from three waves of the National Health and Nutrition Examination Survey’s Epidemiologic Follow-up Study. More than about 4,000 subjects with an average age of 60 years were studied.

Lead author of the study, Dr. Arun Karlamangla, an associate professor of medicine, David Geffen School of Medicine, UCLA, says, “If you start out in good health, alcohol consumption at light to moderate levels can be beneficial. But if you don’t start out healthy, alcohol will not give you a benefit.”

Physical disability consists of having difficulty performing daily tasks like walking, eating, personal hygiene, dressing, etc. The subjects were asked to rate the amount of difficulty they faced in order to perform these tasks unaided, as no difficulty, some difficulty, much difficulty, or mandatory assistance was required for the completion of these tasks.

The subjects drinking less than 15 drinks per week were placed in light or moderate drinking group. On the contrary the people who drank 15 or more than 15 drinks per week were placed in heavy drinkers group. The last group consisted of abstainers that had consumed lesser than 12 drinks the preceding year. Other crucial factors like exercise, age, smoking, heart attacks, and strokes were also taken into consideration for this study.

At the commencement of the study, none of the subjects reported of any disabilities. However, over a period of five years, 15 percent of them became disabled, and around 7 percent died. The results revealed that healthy moderate drinkers had a lower chance of getting disabilities as compared to abstainers and heavy drinkers. Having said this, it was also stated that moderate alcohol consumption benefits were noticed only in those senior adults that were relatively healthy.

Their study findings are published in the American Journal of Epidemiology.