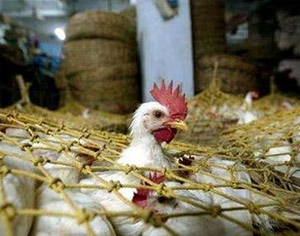 On January 17 2008, the World Health Organization (WHO) warned India that the bird flu outbreak in West Bengal is “serious” and could affect the global community. However, the WHO also said that it was satisfied with the precautionary measures at the national level.

“More serious risk factors are associated with this current outbreak than previously encountered (in Manipur in July 2007),” the WHO said.
It said that the situation was grave because the “affected areas are more widespread and because of proximity to extended border areas”.

On Tuesday, India confirmed an outbreak of bird flu in two districts of West Bengal, Birbhum and South Dinajpur, and directed the state to seal its borders with Nepal, Bhutan and Bangladesh.

Answering email queries from reporters about India’s response to the outbreak, WHO said: “While no action plan can be completely implemented as envisaged, it is important to note that the capacities and the performance at the union level, for both health and animal husbandry sectors, are high, while these may vary at the state/district levels.”

Commenting on the precautionary measures, the UN organisation said precaution is “inevitable and understandable because of the wide range of capacities, as well as logistical constraints, in various areas of this large country”.

Authorities said 8,000 birds had been culled in Birbhum district since the operation started Wednesday, and 10,000 in Balurghat area of South Dinajpur.
However, officials have not yet confirmed if the virus in Murshidabad is of the H5N1 strain. They have sent samples to the High Security Animal Disease Laboratory (HSADL) in Bhopal for confirmation.

The bird flu scare has also spread to South 24-Parganas district adjoining Kolkata besides other southern districts like Hooghly, Nadia and Burdwan from where reports of poultry deaths were pouring in.

As India mounted efforts to contain the disease, Bhutan on Thursday banned import of poultry from the country and said the ban will continue till India declared itself free from bird flu.