A latest study says that schizophrenia and bipolar disorder share a similar genetic cause. This innovative study was conducted by the Karolinska Institutet. 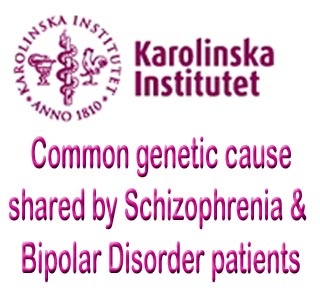 In an attempt to verify this theory an analysis of the medical records of around 2 million families was conducted. Around 35,985 schizophrenia patients, 40,487 bipolar disorder patients, and blood relatives of both were inclusive of this group.

Schizophrenia and bipolar disorder or manic-depressive illness are said to be two of the commonest psychotic disorders affecting the general population. Clinical practitioners and researchers have considered these two disorders separate for over a century on the basis of their definitions and risk factors. But this view has been contested by the recent inventions and discoveries stating that the two disorders are caused by similar genes.

The Swedish scientists study results revealed that the blood relatives of schizophrenic and bipolar disorder patients stood at a higher risk of developing these disorders. They also state that the development of this condition stands a very low chance of developing due to shared environmental factors, it mainly occurs due to genetic factors.

The study results also showed that schizophrenia patients were very vulnerable to bipolar disorder. They also state that a relative of a person with any of these diseases is very likely to have a relative suffering from the other respective disease as well.

This study was funded by the Swedish Council for Working Life and Social Research and the Swedish Research Council.

Their findings are published in The Lancet journal.