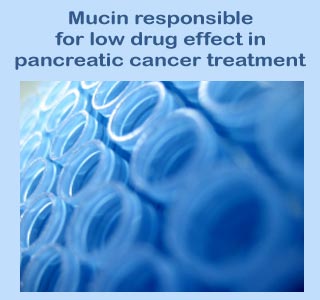 Apparently, the present pancreatic cancer treatments have so far not been entirely successful in treating the disease. A latest study answers why there hasn’t been much improvement in the survival rate of pancreatic cancer patients. The study researchers have discovered a thick mucin layer which acts as a shield to the tumor against the chemotherapy drugs. This layer may hold the answer to why the flurouracil (5-FU) treatment drug does not have much effect on the tumor cells.

This study was conducted by Professor Robert B. Campbell, Assistant Professor of Pharmaceutical Sciences at Northeastern’s Bouvé College of Health Sciences; and his PhD student Ashish V. Kalra. They say that by decreasing the mucin layer, an improvement was noticed in the tumor cells’ reaction to the used drugs. Reduction of the mucin layer may also bring about a decrease in the amount of drugs needed for this kind of treatment.

Campbell says that, “We are beating down the barrier that stands in the way of effective cancer treatment. Our goal is to help improve the efficacy of drugs and limit the amount of these toxic drugs needed for treatment.”

In the first phase of their study, on the biological attributes of pancreatic tumor cells and also the part played by the cellular barriers in curbing the drugs efficiency, the researchers unveiled the mucin act of curbing the 5-FU effect on the pancreatic tumor cells in vitro. It is stated that the present study is the second phase of this study. In this phase they have confirmed the part played by mucin in prohibiting the drugs effects on the tumor cells in vitro.

“We knew from the first study that the ability of pancreatic cancer cells to respond to 5-FU treatment in vitro can be enhanced by inhibiting mucin o-glycosylation. This time, we found that the overall tumor response to 5-FU in mice that received intratumoral injections of the mucin O-glycosylation inhibitor was greater than the saline control group,” says Campbell.

Campbell says that this technique may aid in reducing the amount of toxic drugs used in a pancreatic cancer patient. An enhanced effect of the drug on the tumor cells may prompt a lesser use of treatment drugs on such patients. This in itself is a great step taken forward towards an effective treatment of this cancer.

They state that, not only for pancreatic cancer, but this additional knowledge may help in improving the effects of other conventional chemotherapy drugs as well.

Their findings are published in the European Journal of Cancer.