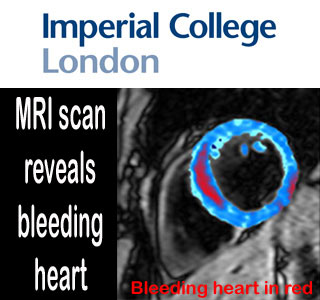 A latest study have taken a huge step ahead in the medical zone and actually captured images of bleeding hearts of people following a heart attack. This study was conducted by the researchers from the MRC Clinical Sciences Centre at Imperial College London.

When the artery, which provides blood to the heart, gets blocked blood supply to the heart gets stopped, due to which there is no flow of oxygen to the heart muscles, which in turn results in a heart attack. It is stated that at present in some people treated for heart attack, a metal tube or stent is placed, which aids in keeping the blocked arteries clear.

The study investigators state that the amount of bleeding in the heart mirrors the severity of the damage caused to the heart after an attack. They hope that this imaging will be used in addition to other tests in an attempt to verify and evaluate a patient’s heart attack and determine their chances of recovery.

First author of the study, Dr. Declan O’Regan, MRC Clinical Sciences Centre at Imperial College London, says that, “Our study gives us a new insight into the damage that heart attacks can cause. Using this new scanning technique shows us that patients who develop bleeding inside their damaged heart muscle have a much poorer chance of recovery. We hope that this will help us to identify which patients are at most risk of complications following their heart attack.”

The researchers captured heart images of around 15 patients from the Imperial College Healthcare NHS Trust. These patients are aid to have recently experienced a heart attack. Images were taken through Magnetic Resonance Imaging (MRI). A study of the MRI scans revealed that the amount of bleeding in the heart tallied with the amount of damage experienced by the heart muscles.

Senior author, Dr. Stuart Cook, MRC Clinical Scineces Centre at Imperial College London says that they still don’t have all the answers to as to whether if the bleeding of the heart may be causing additional heart damage. They say that more analysis is required in order to verify their results. They conclude that the more knowledge they gain about the process during and after a heart attack, the more chance they stand of developing new methods through which heart damage can be repaired.

This study was funded by the Medical Research Council, the British Heart Foundation and the Department of Health, U.K.

Their findings are published in the Radiology journal.