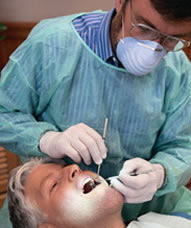 Created by Wenyuan Shi of the University of California, Los Angeles, the antimicrobial drug is safer than traditional antibiotics, for unlike them, it does not kill commensal or “friendly” bacteria and only targets Streptococcus mutans.

Shi created the drug by linking a peptide that specifically targets S. mutans to the active region of Novispirin G10, a broad-spectrum antibiotic that destroys bacterial membranes.

He found that though the compound killed S. mutans grown in liquid or as biofilms, it did not harm other oral streptococci.

Shi now says that giving the antimicrobial as a one-off treatment, or at regular intervals, might help less harmful bacteria to colonise the spot vacated by S.mutans, thus making it more difficult for the bug to regain a toehold.

As for whether or not the bacteria could develop resistance to the drug, Shi thinks that the likelihood for it was slim as the bug would have to go through multiple mutations to thwart membrane destruction.