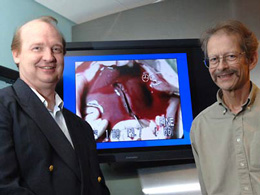 A team of scientists from the US and Hong Kong have developed a biodegradable solution that can control bleeding quickly. The key to this new solution lies in its composition which is made up of protein fragments, called peptides.

Once these fragments come in contact with the wound, they assemble themselves into a gel that forms a seal without harming the nearby cells. eventually the gel breaks down into amino acids, the building blocks for proteins, which are used by the surrounding cells.

The new liquid treatment was applied to several types of tissue, such as the brain, liver, skin, spinal cord and intestine.” In almost every case, it stopped bleeding immediately,” said Rutledge Ellis Behnke, lead researcher of the Massachusetts Institute of Technology.

Ellis-Behnke said that the breakthrough discovery could be of great use during surgery, mainly those which are done in a messy environment such as a battlefield.

“The time to perform an operation could potentially be reduced by up to 50 per cent,” he said.

As much as 50 per cent of surgical time during emergency operations is taken up trying to control bleeding. Currently, doctors have few effective methods to stop bleeding without causing other damage. Current tools which are used to stop bleeding include clamps, pressure, cauterization, sponges, etc.