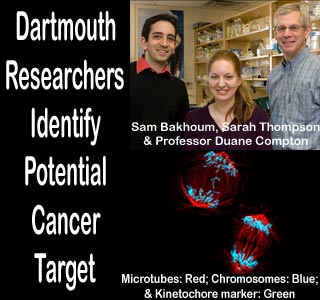 A latest study has discovered that two proteins which during cell division determine chromosome segregation. This discovery could aid in the treatment of solid cancerous tumors which are no longer capable of precisely segregating their chromosomes.

Chromosomal instability is the process where a tumor mixes up chromosomes. Such tumors supposedly cannot be easily diagnosed. Senior author Compton says that, “We show that the function of two proteins, called Kif2b and MCAK, is to correct improper attachments during cell division to prevent the mis-segregation of chromosomes. The two proteins share the workload as Kif2b acts early in cell division and MCAK acts later. This cooperation underlines the importance of proper chromosome segregation for the healthy life of all cells.”

This study was preceded by an earlier study which was conducted by Compton and his team. That study had stated that chromosomal instability mostly occurs due to the chromosome’s act of making improper attachments, during the process of cell division, to the spindle apparatus. Compton says that such improper attachments take place in all the cells; however in tumor cells, these attachments don’t repair, and the cells try to divide with constant improper attachments.

Their present study reveals the function of the two proteins, Kif2b and MCAK. They control the attachment between the spindle apparatus and the chromosomes. The study results prompted the investigators to presume that in the tumor cells a high amount of either Kif2b or MCAK re-established the normal precision of chromosome segregation.

The study authors soon will examine the effect of chromosomal instability directly on tumor development.

Their study findings are published in the Nature Cell Biology journal.