Those who have always been wondering the reason behind women’s obsession with their body weight and their constant battle with what they eat, this study, hopefully, will solve the puzzle for you. 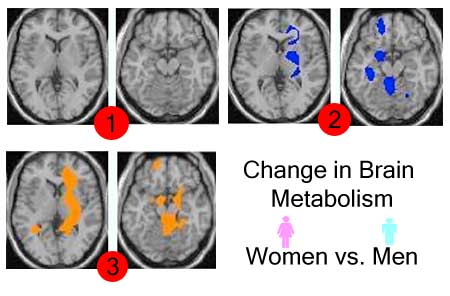 A “ground-breaking” brain-imaging studies has demystified the levels of craving for food in both men and women. Surprisingly, the gender which is so closely associated with phenomenon of “dieting” has been found to be more resistant to control their indulgence in favorite food.

This study also examined the higher relevance of obesity and eating disorders in women which are rarely witnessed in men.

So, to look beyond the fairer sex’s fascination for the weighing scale and dieting, researchers at the U.S. Department of Energy’s Brookhaven National Laboratory examined the brains of 13 women. They also investigated the brain of 10 men.

“Our findings may help us understand the neurobiological mechanisms underlying the ability to control food intake, and suggest new pharmacological methods or other interventions to help people regulate eating behavior and maintain a healthy weight,” said Gene-Jack Wang, lead author on the study. “The surprising finding of a difference between genders in the ability to inhibit the brain’s response to food and hunger will certainly merit further study.”

Scientists carried out the positron emission tomography (PET) scanning to monitor the brain activities of the study volunteers. All these volunteers, that is 13 women and 10 men had fasted for around 20 hours each time prior to a scan. Three separate scans were performed.

Prior to one scan, the volunteers were presented with their favorite foods which included bacon, egg, cheese sandwiches, pizza, cinnamon buns, barbecue ribs, chocolate cakes and more. However, the volunteers were instructed to just smell, taste, observe and react to the food and not consume it. The other scan day, volunteers were asked to “inhibit” their longing for the same foods and another day the scans were carried out without involving food in the procedure.

Also, ratings for the food and their descriptions of feeling of hunger and craving for food during the scans was asked from the volunteers.

What was discovered was that different regions in the brain of men and women were involved in their response to the foods. A gender difference was observed.

“Even though the women said they were less hungry when trying to inhibit their response to the food, their brains were still firing away in the regions that control the drive to eat,” Wang said. “In contrast, men’s brain activity decreased along with their self-reports of hunger during the scan when they were asked to keep their hunger in check.”

“This may indicate a difference between the genders in the ability to perceive and respond to internal body signals,” he added.

Also, the lack of response to inhibition in women has been seen to cause higher inclination to overeat than in men. And this also contributes immensely to obesity and eating disorders in the ladies.

Apart from unearthing the reason behind over-eating, this study also leads a way to find solutions and treatment for obesity.