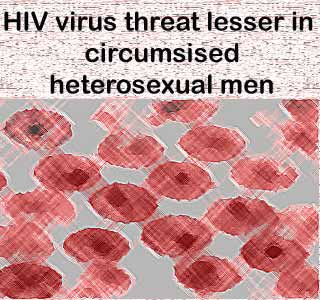 A latest study has evidently revealed that there are lower chances of circumcised heterosexual African American men, who have been exposed to the HIV virus, to get affected with the HIV infection.

Apparently this study agrees with the earlier African clinical trials conducted on this topic. Earlier trials, where circumcised adult men were evidently used, stated that the risk of HIV infection in these heterosexual men supposedly gets reduced.

Seemingly around 26,000 medical records of African American heterosexual men, who had undergone an HIV testing, were examined for the study. These subjects had apparently visited two Baltimore, Maryland, STD clinics from the period, 1993 to 2000. This evaluation was conducted by Lee Warner, Ph.D., MPH, and colleagues, Centers for Disease Control and Prevention (CDC); in collaboration with the Johns Hopkins University School of Medicine.

Supposedly the subjects had reported no use of drugs and that they had apparently experienced sexual intercourse only with women. It’s also believed that subject’s visits to the clinics were apparently classified as involving known HIV exposure if there had been a recent notification of such exposure by a sex partner or by a clinic’s disease intervention specialists. Clinic visits for other reasons were evidently classified as involving unknown HIV exposure.

The study investigators had evidently noticed that, the previous U.S.-based studies had insinuated that a lower HIV risk may somehow be connected with circumcision. However it’s also stated that these studies were conducted on small sample size or that the HIV incidence was low, which in turn evidently did not attain statistical significance. The current study, on the other hand, apparently mainly kept an eye on the patients who had reported exposure to an HIV-infected female partner, thus evidently it was successful in announcing that circumcision may possibly prove to be beneficial against this disease. The study investigators say that this approach “represents a significant methodological advancement over most previous observational studies.”

It’s believed that circumcision may prove to be crucial for the U.S. minority population. This population apparently includes the Hispanics, along with the African American men. It’s stated that these men are supposedly more at risk of getting affected by an HIV infection.

Their findings are published online in The Journal of Infectious Diseases.