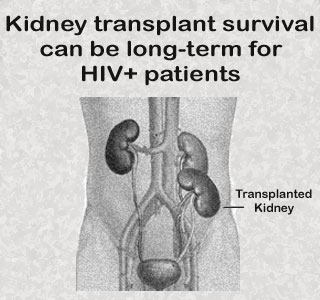 According to a latest study, HIV-positive kidney transplant recipients have similar survival rates for themselves and their donor organs, similar to their non-HIV recipients. However this may be possible only after a few risk factors associated with transplant failure’s have been taken into control.

Earlier HIV patients were not viewed as potential transplant candidates, since their survival rate post-transplantation was not predictable due to their immune-weakening disease. Another area of concern was the use of drugs to suppress the immune system post-transplant in an attempt to curb the chances of organ rejection. This criterion is considered more risky in HIV positive patients.

This latest study was led by Jayme Locke, MD, a resident in the Department of Surgery at Johns Hopkins University School of Medicine. She says that, “Kidney transplantation is a viable and necessary option for HIV-positive patients with chronic kidney disease, especially since kidney disease is taking such a large toll on this group.”

The study investigators state that their study reflects the role played by the novel antiretroviral therapies in significantly reducing HIV-related death rates. Death of HIV patients is not solely caused by their infection; it can take place due to various other factors as well. For instance it’s stated that about 10 percent HIV-induced deaths take place due to kidney diseases.

On deeper analysis it was discovered that there was a comparatively late start of functioning in few of the kidneys transplanted into the HIV-positive recipients. This delayed graft function (DGF) is said to have been the culprit for the reduction of kidney survival rate by about 30 percent. Locke says that this criterion can be avoided, on regulation of certain factors. For instance deceased donor kidneys, advanced organ donor age, and long cold ischemic times among others should be taken care of.

Their findings are published in the Archives of Surgery.