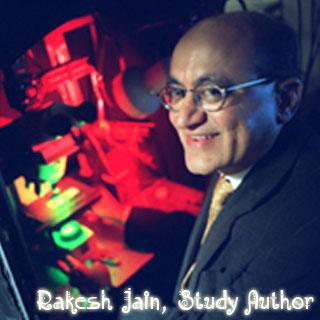 A latest study has stated that the positive effects of the anti angiogenesis drugs witnessed in the treatment of a type of brain tumor may take place due to the reduction of edema or swelling of the brain tissue. They have gone so far as to state that the use of this specific drug in the treatment of glioblastomas may take place due to the reduction in the swelling of the brain tissue, and not due to any direct anti-tumor effect. This statement has been made by the Harvard experts at the Massachusetts General Hospital.

Through this study, the investigators have explained the methodology of how the use of an experimental drug may aid in reducing the swelling of the brain tissue and may aid in increasing the survival rate in animal models of glioblastoma.

Study co-author, Rakesh K. Jain, director of the Steele Laboratory, Massachusetts General Hospital and also Cook Professor of Tumor Biology, Harvard Medical School, says that, “Our findings suggest that anti-angiogenesis therapy can increase patient survival even in the face of persistent tumor growth. In glioblastoma clinical trials, it is important to separate survival analysis from that of tumor response to therapy, since many factors combine to cause patient deaths.”

A previously conducted study is said to have revealed that the cediranib drug may normalize the abnormal blood vessels taken place in glioblastomas. This abnormality was said to have taken place due to the reappearance of leaky blood vessels following radiation, chemotherapy or surgery. Thus, the use of this drug was found to be capable of reducing edema or swelling of the brain tissue. However, it was stated that the procedure through which this particular effect took place was not yet clear. Therefore, the present study was said to have been conducted with the aim of determining whether the effects of the cediranib drug took place due to a decrease in the edema or from a direct anti-tumor effect.

A study on mouse models revealed a relative reduction in the swelling of the tumor-induced blood vessels in comparison to the mouse that were not provided with this drug. Having said this, it was further stated that this drug did not seem to reduce the rate at which the tumor grew. However this drug did seem to increase the rate of survival of the mouse that were treated with it.

These findings have been published in the Journal of Clinical Oncology.