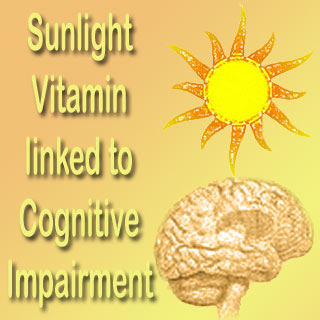 A team of researchers have come together and established a link between Vitamin D and cognitive impairment in older adults. Cognitive impairment is often associated with dementia, thus this study findings may prove to be beneficial for identifying various new ways for reducing dementia in people.

This study was conducted jointly by the researchers from the Peninsula Medical School, the University of Cambridge and the University of Michigan. They have in unison, linked the “sunshine vitamin,” Vitamin D with cognitive impairment.

Vitamin D is very crucial for maintaining an individual’s bone health, absorption of calcium and phosphorous, and it also gives a helping hand to the immune system. There are three main vitamin D sources in humans: sunlight, foods like oily fish, and foods enriched with vitamin D like milk, cereals, etc. The main criterion faced by older adults is their body’s reduced ability to absorb vitamin D from the sun. Thus they have to make up for their vitamin D dosage through the other sources.

Study author, Dr. Iain Lang, from the Peninsula Medical School, says that, “This is the first large-scale study to identify a relationship between Vitamin D and cognitive impairment in later life. Dementia is a growing problem for health services everywhere, and people who have cognitive impairment are at higher risk of going on to develop dementia. That means identifying ways in which we can reduce levels of dementia is a key challenge for health services.”

Dr. Lang says that adequate sunlight exposure is very essential for maintaining the vitamin D level of an individual. This process may prove to be difficult for older adults in U.K., because of their limited sunlight exposure. This problem can be overcome, with the use of vitamin D supplements. Supplement usage has long been suggested to have the ability to enhance the bone health of an individual. However, this study suggests other positive effects of these supplements as opposed to only benefit bone health. The study investigators state that a more detailed analysis needs to be conducted on the issue, in order to determine the cost-effectiveness of these supplements; and also in revealing that they may actually be of greater help in reducing older adult’s chances of developing dementia and cognitive impairment.

Their findings will be published in the upcoming Journal of Geriatric Psychology and Neurology issue.