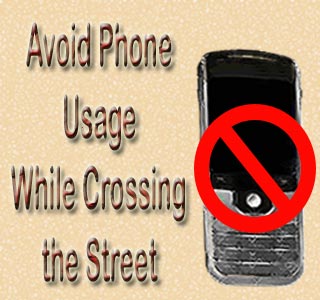 A latest study states that the chances of meeting with a pedestrian accident are higher for those children who talk on their cell phones while crossing the street. This study was conducted by the psychologists at the University of Alabama at Birmingham (UAB).

Around 77 children, aged 10-11 years old were studied for this purpose. The study investigators made use of a virtual reality software program and three screens that displayed a Birmingham-area crosswalk. There were simulated vehicles of varying sizes traveling on the virtual street. These children had to cross the street with a research assistant, six times without making use of their cell phones, and another six times while talking on their phones.

The psychologists say that, “Cell phones clearly offer convenience and safeguards to families, but they also may pose risk, particularly when children attempt to multitask while conversing on the cell phone and have reduced cognitive capacity to devote to potentially dangerous activities such as crossing streets.”

The UAB psychologists state that the same manner where vehicle drivers should avoid talking on their phone while driving, even pedestrians should try not to use their cell phones while crossing the street. They further say that a more detailed analysis is required to gauge the effect that listening to music, texting, and talking to peers may have on children while crossing the street.

Their study findings will appear in the February issue of Pediatrics.