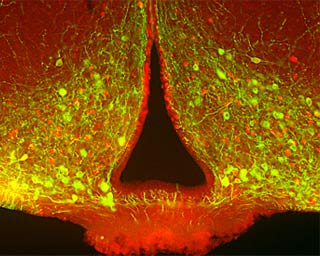 With binge eating on the rise, more and more people are falling into the obese category. Along same lines, Yale School of Medicine scientists have revealed that free radicals may play a role in decreasing appetite.

The scientists found that increasing levels of free radicals in the hypothalamus either directly or indirectly seem to repress appetite in mice struck by obesity. This is possibly done by setting the satiety-promoting melanocortin neurons to activation. However, free radicals are apparently linked to aging and tissue damage.

senior author Tamas Horvath, the Jean and David W. Wallace Professor of Biomedical Research, chair of comparative medicine and director of the Yale Program on Integrative Cell Signaling and Neurobiology of Metabolism, specified “It’s a catch-22. On one hand, you must have these critical signaling molecules to stop eating. On the other hand, if exposed to them chronically, free radicals damage cells and promote aging.”

It is probably due to this that prolonged overeating seems to kickstart a mechanism to hold back the creation of these free radicals. While this mechanism is touted to shield cells from damage, it is also responsible for reduction in the ability to feel full after having a meal. After the mice finished eating, the team found that neurons that helped in prohibiting overeating tendencies seemingly had high proportions of free radicals. This process is due to the hormone leptin and glucose that apparently signal the brain to regulate food intake. When mice eat, leptin and glucose levels appear to rise along with free radical levels. However, mice with diet-induced obesity, supposedly have neurons that show leptin resistance. These levels of free radicals being buffered by peroxisomes, seem to prohibit the activation of these neurons and thus the capacity to feel satisfied after eating.

Horvoth says that free radicals apparently have a critical role to play in boosting satiety along with the degenerative processes linked to aging. This is one reason why therapies of obesity often seem to arrive with major side effects. Presently, researches are aimed to see if there are ways to promote satiety without the increase in free radicals found in the brain and periphery.

The analysis is published in Nature Medicine.