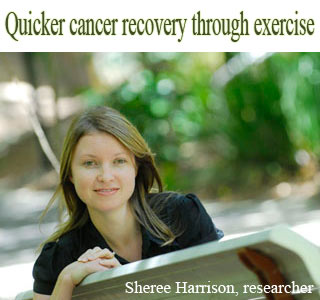 A latest Queensland University of Technology study has discovered that breast cancer survivors’ quality of life can be improved through physical activity. Inclusion of physical activity in their daily routine also aids these women in better handling their disease diagnosis and post-treatment recovery as well.

About 300 breast cancer survivors were interviewed for about a year for this study. A record was maintained about the amount of physical activity that they had, and its effect on their quality of life. About 50 percent of these women were discovered to be inactive or were not having enough physical activity.

Sheree Harrison, researcher from School of Public health, Queensland University of Technology, says that the younger women were more prone to struggle with the knowledge of their cancer diagnosis. It is said that physical activity helped them deal with their diagnosis more positively. Routine physical activity was also linked with lesser physical side effects like tiredness and feeling of pain.

Study authors state that the intensity of physical activity was not the main criteria. Exercise in general was found to yield positive results and aided these diagnosed women to recover in a better manner. Exercise was also found to ensure a more enhanced emotional well being in these women.

“The main finding was that women under 50 who were recovering from breast cancer and were consistently physically active were more likely to report better emotional well-being and have a higher overall quality of life than those who were less active or sedentary,” says Harrison. It seems that regardless of their amount of exercise, their quality of life was higher on an average. However, the authors also point out that the addition of exercise in their daily routine could aid in reducing their other co-morbidities, like high cholesterol or high blood pressure.

It is stated that many cancer patients may misconstrue that they should rest and not have much physical activity; however these patients are recommended a certain amount of physical activity. In fact the author’s say that women should make an effort to be as active as they possibly can. Such activity may even include taking a walk around their block.