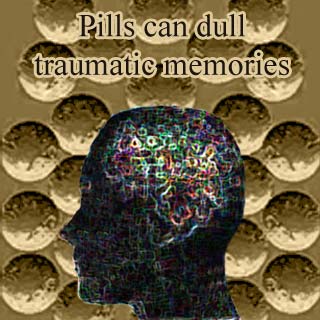 Memories are very crucial and precious to all human beings. However, it’s a twin sided sword; it can also be the cause of heartaches and nightmares in some people. Now a team of investigators have come up with a new way of eradicating bad memories from the mind. They believe that a common heart medicine may be able to alter the way undesirable memories are recollected.

These investigators state that the beta-blocker propranolol drug can be used to treat people suffering from the emotional after-effects of traumatic experiences. They state that this drug modifies the recollection of such memories. A study was conducted on about 60 subjects, in order to verify the outcome of this drug on their memories.

Dr. Merel Kindt, psychologist of Amsterdam University, in the Netherlands, and colleagues created fearful memories in the subjects by showing them spider images while giving them mild electric shocks. This prompted the subjects to form a negative connection between spider images and a certain amount of discomfort. The following day, these subjects were divided into two groups. One group was given the beta blocker, while the other was given a placebo pill. Both the groups were again shown the same spider images, as the previous day. These investigators evaluated the amount of fear that the subjects felt while viewing the images, by playing sudden noises and gauging the subjects’ response to these noises.

It was noticed that the beta blocker receiving group displayed a lesser amount of fear as compared to the placebo pill receiving group. The following day, all the subjects were tested again, but this time without any prior pill intake. It was again discovered that the group that had received beta blocker displayed less fear as compared to the group that had received the placebo pill.

It is stated that the beta blockers function by altering the way frightening memories are stored in the brain. People would remember their frightful experience, but the way they recollect that experience may alter. However, it is also stated that this drug is not only restricted to frightful memories; it could also reduce the intensity of different kinds of other emotional memories like happiness and sadness as well.

More studies need to be conducted before these findings can be considered for use in treating people suffering from traumatic experiences.

Their findings are present in Nature Neuroscience.